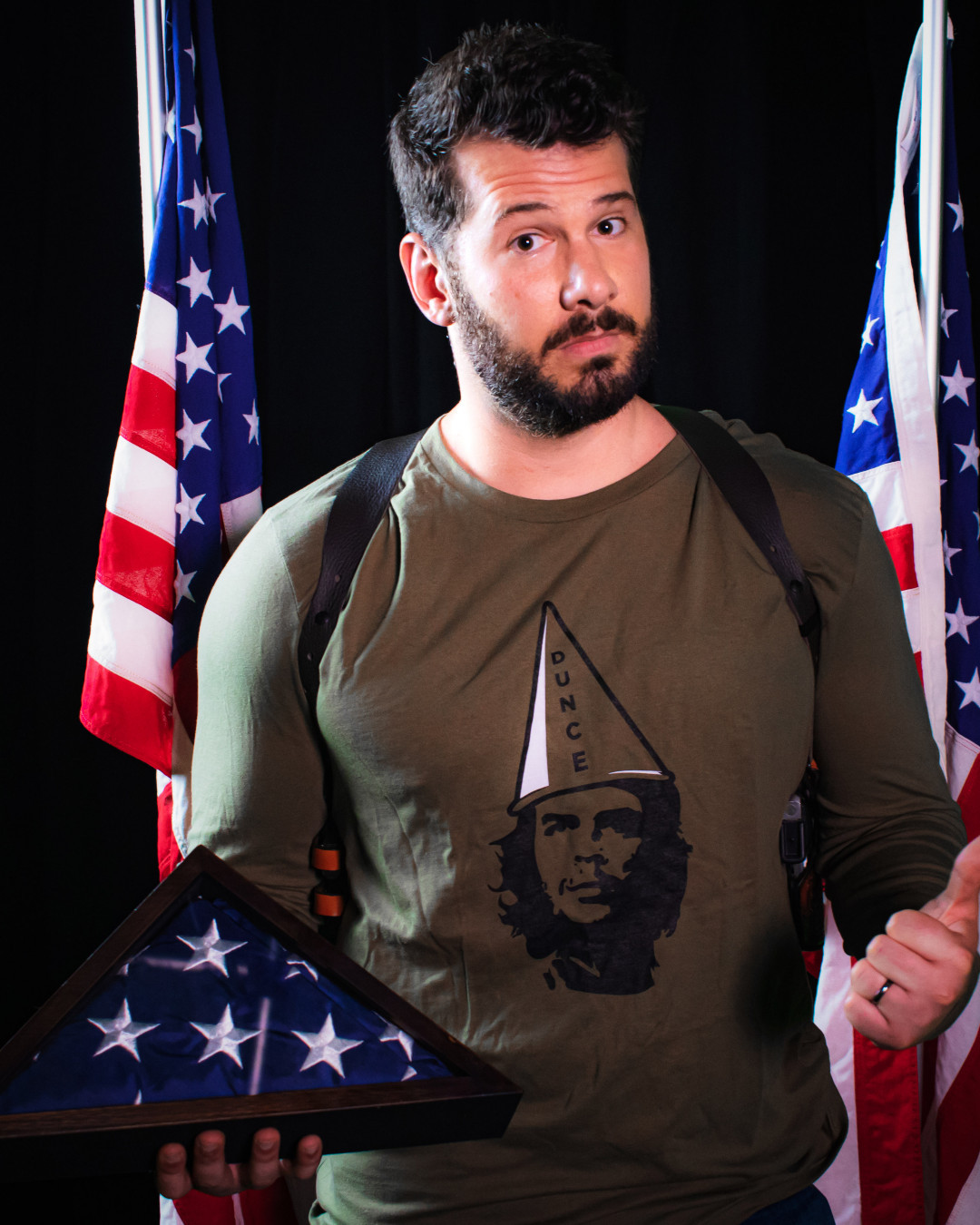 Steven Blake Crowder popular known as Steven crowder was born on the 7th of July, 1987 Grosse Pointe, Michigan, United States. He is an American-Canadian conservative political commentator and media host, actor, and comedian.

He hosts Louder with Crowder, a daily political podcast and YouTube channel, which includes a recurring segment called “Change My Mind”. He is also a former contributor at Fox News.

Crowder was born on July 7, 1987, in Detroit, Michigan in the family of Francine and Darrin .S. Crowder. His mother was French Canadian, and at the age of three, his family moved to the Montreal suburb of Greenfield Park, Quebec, Canada where he lived for the rest of his childhood.

His family is a devout Christian. He also has an elder brother Jordan Crowder and is a cousin of Sylvie Lacaille.

He attended Centennial Regional High School in Canada, and at the age of 18, he moved back to the United States. Crowder attended two semesters at Champlain College in Burlington, Vermont, where he majored in creative arts. Though he is very successful in life, he was always just an average student who didn’t put forth much effort in high school or college.

While in High School, he started an unofficial grappling club as an easy victim of bullies based on his Christian beliefs. Steven got dumped by his friends as he avoided smoking and drinking. Moreover, he got nicknamed as Tubes after making an appearance in the Yoplait Yogurt Tubes commercial. His college professor also used to make fun of him for choosing stand-up comedy as a career. Even though there are not many records about his early days, during his teenage years, he made an attempt at stand-up comedy. As a matter of fact, his first gig came up when he was only 15 years old, and this fact demonstrates the levels of talent he had at the time.

At age 13, he worked as a voice actor for the character Alan “The Brain” Powers on the children’s television series Arthur. He launched Babe Magnet in 2001 and started acting in TV commercials. He began performing stand-up comedy at age 17, when he joined a local comedy club to become a stand-up comedian. He got chased out of the stage after his jokes angered the audience in the club. Steven didn’t lose hope and tried in the Just for Laughs festival by becoming its youngest comedian in 2005. He got featured on XM Radio and toured all over North America. He had first published his content on the YouTube channel on June 2, 2006. The self-titled channel managed to attract approximately 870 million video views. Then, he went on associating with various programs.

For someone who did not have an interest in politics for most of his life, the shift to political commentator was unexpected. Regardless of being new in the field, he started gaining a regular following and was even featured on many conservative shows on a regular basis. By 2009, Crowder regularly posted satirical videos on politically conservative media, including Pajamas Media and later at Andrew Breitbart’s Big Hollywood. Crowder served as the master of ceremonies at the 2011 Conservative Political Action Conference (CPAC), and generated some controversy with a rap video he premiered at CPAC 2012.

In December 2012, Crowder and members of Americans for Prosperity were involved in an altercation at a demonstration in Michigan concerning the state’s recently passed right-to-work law.The incident began with an attempt by union activists to tear down the Americans for Prosperity tent, which was eventually successful. During the altercation, Crowder was punched several times by a union activist. Out of cowardice, Crowder posted an edited video of the incident to YouTube that omitted the part where he instigated the attack.Steven became a member of the American for Prosperity community during this union protests, which kept his name highlighted through “The New York Times” articles.

In March 2013, Ingham County Prosecutor Stuart Dunnings III declined to press charges against anyone involved in the December 2012 altercation. According to Dunnings, his office was originally sent an edited version of the video of Crowder’s altercation. However, upon reviewing the unedited version, the prosecutor’s office decided not to pursue the case because the union member had acted in self-defense.

In October 2013, Fox News ended its relationship with Crowder due to clash with fellow host Sean Hannity and the network as a whole.This was announced shortly after Crowder made negative statements about Fox News host Sean Hannity and about Fox News. In 2017, the Louder with Crowder program, featuring mainly comedic content and political commentary, became a daily program featured on Conservative Review’s new streaming service, CRTV. On December 3, 2018, CRTV merged with Glenn Beck’s TheBlaze, where Crowder continues to be hosted, alongside his YouTube channel, which has existed since 2009.  Crowder used to take part in martial arts competitions. He had marked his prominence with the North American Grappling Association series. He had also won the amateur World Championship title Heavyweight Jiu-Jitsu. Internet sensation got huge recognition with the social media platforms. With it came a sign that says “Change My Mind

“Change My Mind” is a regular segment conducted by Crowder in which he sits at a table with a sign including the phrase “Change My Mind” and invites people walking by, often students at a university campus, to change his mind on a controversial subject. A photograph of Crowder seated behind a sign in February 2018 reading “Male Privilege is a Myth / Change My Mind” outside the Texas Christian University campus became an Internet meme.

Crowder’s show has also seen success on Apple’s podcast list, having remained on the top 100 list over the course of 2020.This success is mirrored on YouTube where the Louder with Crowder podcast has 5.57 million subscribers and his secondary channel CrowderBits has approximately 1.09 million subscribers.

In June 2019, YouTube investigated Crowder for using racist and homophobic slurs targeting Carlos Maza in multiple videos reacting to the Vox series Strikethrough, which Maza hosts. Crowder referred to Maza as “Mr. Lispy queer”, an “angry little queer”, and a “gay Mexican”. Crowder mocked Maza using a stereotypical gay voice, sometimes while wearing a t-shirt with Che Guevara on it that said “Socialism is for f*gs [sic]”. YouTube concluded that the language used by Crowder “was clearly hurtful”, but “the videos as posted don’t violate our policies”. It determined that Crowder had not encouraged his viewers to harass or dox Maza either on YouTube or other platforms and that the main point of his video was to respond to opinion.

The decision to not suspend the channel drew considerable criticism. The next day, YouTube suspended the channel’s monetization, because “a pattern of egregious actions harmed the broader community”. In August 2020, YouTube re-monetized some of Crowder’s content on the site, stating that Crowder had satisfactorily addressed the issues with his behavior and content.

Early the next year, it suspended his channel for a week for spreading misinformation about the 2020 United States presidential election; it then demonetized his account for good.

Crowder announced in February 2021 that he filed a lawsuit against Facebook, alleging he was unfairly censored by the platform.

Steven stands at a height of 1.88meters. 6ft 2inches

Steven Crowder is a Canadian-American actor and comedian who has a net worth of $4 million. He has one of the better-paid salaries in his field outside of mainstream media and larger conservative channels such as The Daily Wire, Newsmax, or The Blaze. Income, salary, and earnings

Steven Crowder’s position in the list of the highest-paid YouTuber’s net worth suggests that his earnings had started rising from $3 million to $4 million. Producing content on a consistent basis has been the reason behind this recognition. Steven Crowder Income suggests earning of $100,000 per month. This amount is equal to $1.2 million each year. Since its inception, the self-titled YouTube Channel had got over 4.39million subscribers.

Besides, the YouTuber has a follower base of 733K followers on Instagram. With 1 million followers on Twitter; the personality is working for a charitable cause. Steven Crowder’s monthly earnings range approximately between $6.4K and $102.8K.

Steven Crowder’s yearly earnings range approximately between $77.1K and $1.2million.  Besides, he also makes money for an Instagram-sponsored post. For each post, he makes approximately $2,015-$3,358. He has shown his good side with the contribution to the low-key charitable events. He does so by staying away from the public media.

How much does Steven Crowder earn just from YouTube?

YouTube helps Steven Crowder get $188 and $3,000 daily. Besides the YouTube ad revenue, Crowder earns the amount from subscription service Mug Club. The YouTube channel was earning him an estimated amount of $85,000 per month.

Besides his career as a political commentator, Crowder earns from YouTube. Endorsements on the show give him the earning between $2,000 and $3,300. He makes that money for sponsored posts or video mentions. For speaking at events, he charges $30,000 to $50,000.

Home value suggests a property of $282,000, which is a part of his family’s possession.  Crowder has spent his hard-earned money on himself for defending his right to free speech. His wife, Hilary, has been hospitalized that had added to the expenditures.

Steven Crowder is well known as a lover of pets. He loves dogs in particular. Dogo Argentino couple, namely Betty and Hopper, that he owns is expensive. The average market price of the species ranges between $500-$700. Brawny Hopper and Betty that he owns have been expensive too. Income, salary, and earnings

Some of his appearances in films and TV series include

He married his wife Hillary in August 2012 and wrote about the benefits of remaining abstinent before his marriage.Crowder has dealt with some health issues in recent years, In July 2021, Crowder underwent a surgical operation in which titanium bars were inserted into his chest in order to counteract his congenital condition of pectus excavatum, or a sunken chest.The surgery caused fluid to accumulate in his lungs, which he called “excruciatingly painful”. Several weeks later, he was rushed to the hospital due to a collapsed lung. In August 2021, as Crowder was still recovering from both treatments, his wife gave birth to twins—a son, Magnus, and a daughter, Charlotte.

His elder brother Jordan works as an actor and filmmaker in the entertainment business.

His mother works as a costume designer and stylist in a Canadian TV network and is a French-Canadian.

You can connect with crowder on

He won the national, My Space Contest, So You Think You’re Funny.

Steven is a conservative Canadian-American commentator, actor, and comedian.

Steven stands at a height of 6 feet 2 inches.

He is married to his lovely wife, Hilary Crowder. The couple tied their knot in August 2012.

5. How much is Steven worth?

He has an estimated net worth of $4 million.

No, they are not related

7. Who is Steven Crowder’s Wife?