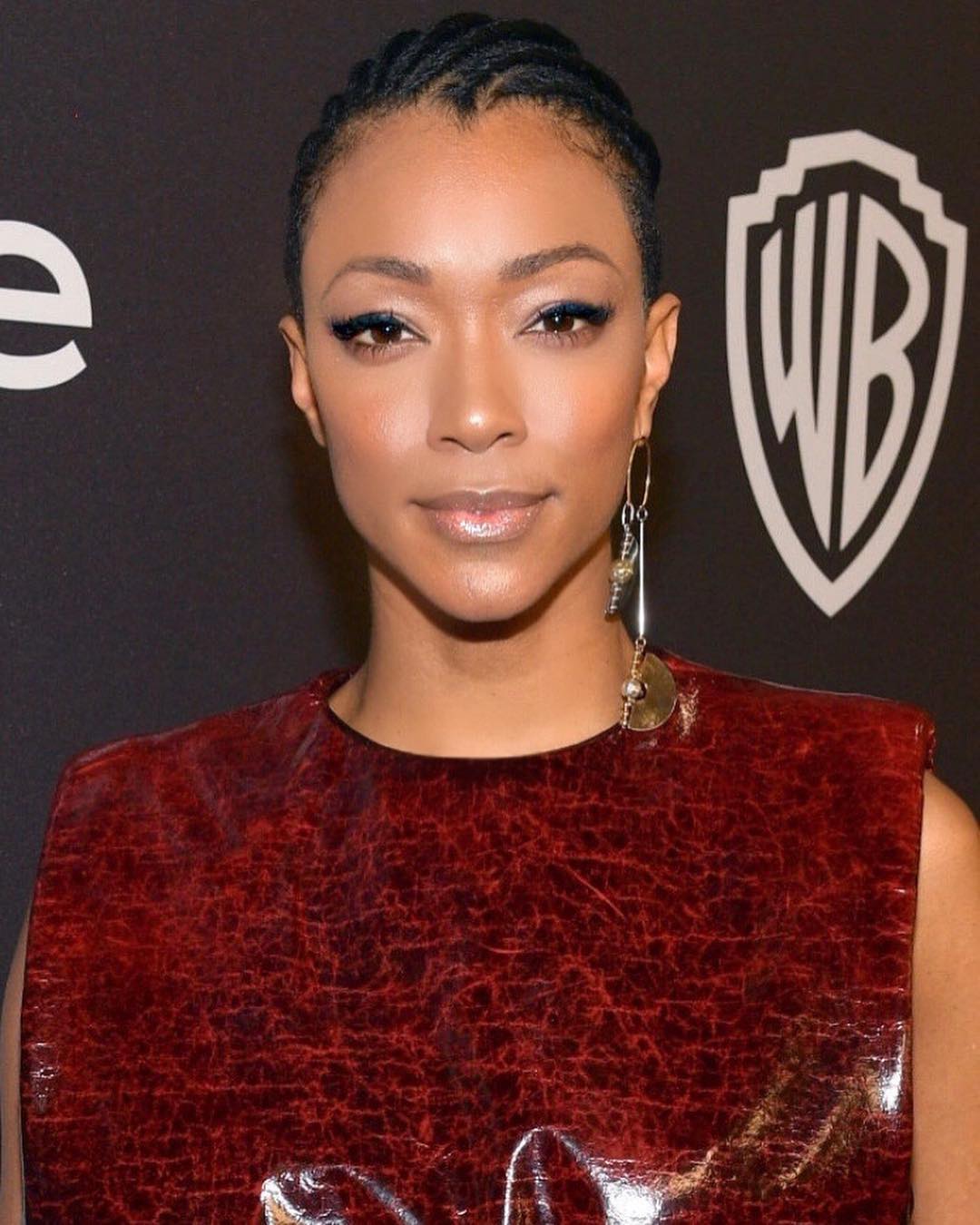 She was born in Russellville, Alabama United States on the 21st of March, 1985. She is best known for her television roles as Michael Burnham, the main character in the streaming television series Star Trek: Discovery, and as Sasha Williams on The Walking Dead.

She also played Courtney Wells on The Good Wife. From April 2016, Martin-Green has served as an ambassador for Stand Up to Cancer, supporting clinical trials.

Martin-Green was born and raised in Russellville, Alabama. Her parents were Charles Winston Martin (1943–2021) and Vera Lynn Martin-Moore (née Freeman) (1950–2021). Her parents divorced and her mother remarried prior to her death.

She has four siblings, one full sister, NaKisha, and three older paternal half-sisters whose names are unknown.

Although Sonequa Martin-Green has always had a passion for acting and performed in plays throughout her childhood and teenage years, She had initially planned to become a psychologist before deciding to pursue a career in acting when she was in the tenth grade.

On her decision to become an actor, she said, “I didn’t know I was going to be an actor until I was 16. I thought I was going to be a psychologist, which is interesting because it’s very similar to acting. I was fascinated with human behavior and why people do what they do. I was in the middle of rehearsal in 10th grade when I had this epiphany. She was the salutatorian of her high school.

Sonequa is close to her family and thanks to them for their support as she grew up, including when she decided to pursue acting.

She attended the University of Alabama and graduated in 2007 with a degree in theater. After which She originally moved to New York City to pursue a career in acting and stayed there for almost five years before relocating to another acting hub: Los Angeles, California, It was here that her career truly began to take off.

While known primarily for her television roles, Sonequa Martin-Green made her debut in film with various film roles in 2005.

In 2009, she played the lead role of Tosha Spinner in Toe to Toe opposite Louisa Krause, the fiercely determined scholarship student who seeks to build a brighter future outside of Anacostia and away from one of Washington’s poorest neighborhoods.

The film received generally positive reviews, with Martin-Green’s performance receiving critical acclaim, even from the film’s detractors. In November 2018, it was announced Martin-Green would star in The Outside Story.

From 2009 to 2011 Martin-Green had a recurring role as Courtney Wells in the television series The Good Wife.

In 2013 she starred as Tamara in the TV series Once Upon a Time. Since 2012 Martin-Green has starred as Sasha Williams on the series The Walking Dead.

She had recurring roles as Kanessa Jones on the TV series Army Wives in 2009 and as Michelle Terry in the TV series NYC22 in 2012. She has also starred in the movies Blind Thoughts, Toe to Toe, Rivers Wash Over Me, Yelling to the Sky, and Shockwave Darkside. She also appeared in episodes of the TV series Law & Order: Criminal Intent and Gossip Girl

In December 2016, her role as the lead actor of Star Trek: Discovery was reported in the trade press and officially confirmed by CBS All Access in April of the following year (after her Walking Dead character featured in her final regular appearance).

She debuted as First Officer Michael Burnham in “The Vulcan Hello” on September 24, 2017, and has remained the series central character throughout the three seasons aired by 2020.

The American actress has a net worth of $5 million. Obviously, her acting career and appearances in film and television will is Sonequa Martin-Green’s primary stream of income. Actors are paid a flat rate for their appearances in film or television, and lead actors can receive a bonus depending on how popular their media becomes.

In addition to her up-front payments, whenever a show or film that Sonequa acted in is aired as a rerun, she gets a royalty percentage. This helps her to continue making money each day from her past work!

Since she is the lead character of Star Trek: Discovery, she receives money for every single episode in a season. Episodes aired as reruns in which she features (essentially every episode) also generate a smaller but continuous income.

Martin-Green was pregnant during the filming of the fifth season of The Walking Dead, which she covered up by wearing thick layers of clothing and using larger guns. On July 19, 2020, she gave birth to a girl named Saraiyah Chaunté Green. Since April 2016, she has been an ambassador for Stand Up to Cancer, encouraging clinical trials. Her mother was a three-time cancer survivor and her sister has breast cancer.

She is the daughter of Vera Martin (Mother) and Charles Martin (Father). Martin-Green also has one sister and three older half-sisters. Her mother is a three-time cancer survivor and her sister is struggling with breast cancer.

On July 13, 2021, Sonequa announced on Instagram that both her parents had died; her father on April 9 and her mother on April 10 due to unrelated reasons. An obituary revealed her father had a “brief but valiant battle with liver cancer”.

Speaking of her love life, Martin-Green is married to Kenric Green. The happy couple tied the knot on December 4, 2010.

They met while acting commonly in the play, Fetch Clay, Make Man, at the McCarter Theater in Princeton, New Jersey.

She has a very strong and supportive relationship with her husband which we love to see!

Kenric is also an American actor, writer, and producer. He started his career in 2006. Kenric gained fame for his role as Scott in the television series The Walking Dead. He was among the cast in Star Trek: Discovery and Hawaii Five-0.

Martin-Green welcomed a bouncing baby boy called Kenric Justin Green II on January 10th, 2015, in Los Angeles. She was expectant while filming the fifth season of The Walking Dead. She hid the pregnancy by wearing thick layers of clothing and using larger guns.

On the 19th of July 2020, the actress welcomed a  baby girl named Saraiyah Chaunté Green.  The actress shared an adorable snap of her children on her Instagram account, captioned, “My sweet, sweet Valentines….high off the love, today, and every day after.

Sonequa Martin-Green was born to her parents Charles Martin and Vera Martin. Further, she was born and raised in Russellville, Alabama along with her parents.

Sonequa had revealed the difficulties her parents had faced during their early years just because they belonged to the black community. The racial discrimination led her father Charles to join the Fruit of Islam Guard. He was deeply moved by Malcolm X.

Her paternal grandfather was a war veteran who told her father ‘not to look in the eyes of White man’.

Similarly, both Charles and Vera were denied access in public places and were forced to sit in the rafters. In addition, they drank water from the ‘Colored Only’ fountains.

Sonequa Martin-Green’s parents died in April 2021 due to ailments. Charles and Vera Martin paved their path to heaven one day of each other. However, the reason behind their death still remains a mystery.

Charles was born in 1943 and died at the age of 78 while Vera was 71 when she breathed her final breath. The first one to ascend heaven was her father Charles on 9 April 2021. Shortly after mother, Vera Martin, on 10 April 2021. As per various news articles, Charles had been suffering from lung cancer and was undergoing several medical treatments. There have been no clear statements on vera’s death.

Sonequa martin has 4 siblings. A full sister and 3 half-sisters whose names are unknown.

Rivers Wash Over Me

Yelling to the Sky

Once Upon a Time

1. What is Sonequa Martin-Green’s social media?

You can connect with the actress on Instagram @therealsonequa

She is married to  Kenric Green

3. How did Sonequa Martin-Green lose her parents?

The actress announced on Instagram that her parents died in April 2021 although the cause of their deaths was not revealed.

4. Does Sonequa have a sister?

She is 5ft 4½inches tall