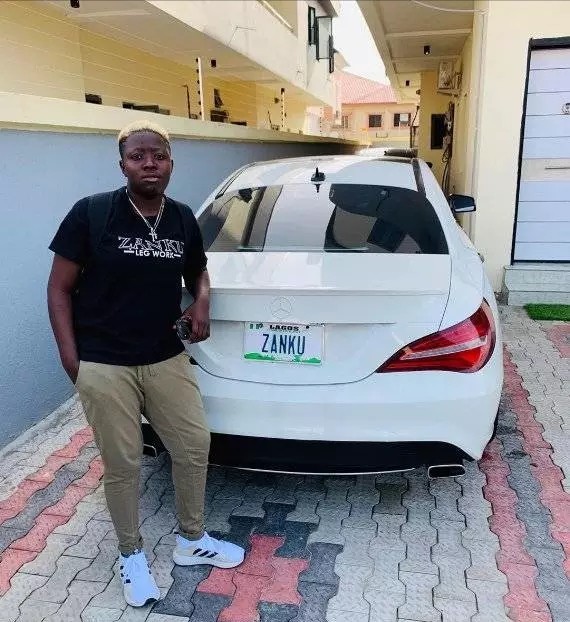 Seyi Awonuga popular known as Shigh Lofe was born on March 7, 1997 in Lagos State, Nigeria. She is a Nigerian talented Record Producer, Talent Manager and a Business Manager.

Shigh Lofe is one of the top Nigerian A&R personnel in the music industry. She is the Founder and CEO of the record label, Bang Mewsic Entertainment.

Seyi ‘Shigh lofe’ Awonuga was born in Lagos State, Nigeria on March 7,1997. She grew up in mainland with her family and had her Primary and Secondary school education in Lagos State.

When she was young, she developed passion for music, especially hip pop and Rap. Although, she wasn’t good at singing but was interested in making a name in the music industry.

During her secondary school days, she started working as A&R personnel, scouting for young talented musicians in her neighborhood and connected them with good record producers for a good songs and beats. She was really into it even in her higher school education.

Seyi ‘Shigh Lofe’ Awonuga started her Career journey when she was very young. She is one of the talented Nigerian biggest Music Managers.

She is the founder and CEO of Bang Mewsic Entertainment– a record label brand that brought out the Nigerian A-list Rapper and Songwriter, Zlatan Ibile.

Zlatan Ibile started his music career with the record label before he gained international fame and founded his own label known as Zanku Records.

Shigh Lofe, who is a talented A&R influencer had made ways for Zlatan in the music industry and also linked him with many top artistes in the industry.

Bang Mewsic Entertainment is a record label brand that are interested in developing the talents of upcoming recording artists in the country.

Over the years, as one of the Nigeria top music promoters, she has been opportune in collaborating, engaging and working with top Artistes like Davido, Olamide, Wizkid, Perruzz, Mayorkun, Zlatan Ibile, burna boy, lyta, Fireboy DML, Ola Dips, Zinoleesky, Picazo Rhap, Funke Adinkele and Rahman Jago.

Shigh Lofe has toured many cities in Nigeria, Europe and North America and also handled logistics for some of the biggest Music concerts in Africa.

Seyi ‘Shigh Lofe’ Awonuga is still not married but in a relationship with a Nigerian renowned Musician, Zlatan Ibile. They welcomed their first child, a boy, on June 2019.

Shigh Lofe is a beautiful lady with dark  complexion and on low-cut tinted gold hair. She is very friendly and jovial person. She has been close to so many Nigeria Afro beats Musicians. Her best friend is singer, Lyta. She is also known by the nickname Cash Lord and owns two exquisite cars.

Shigh Awonuga welcomed a son with popular Nigeria Musician, Zlatan Ibile but has not revealed anything on it.