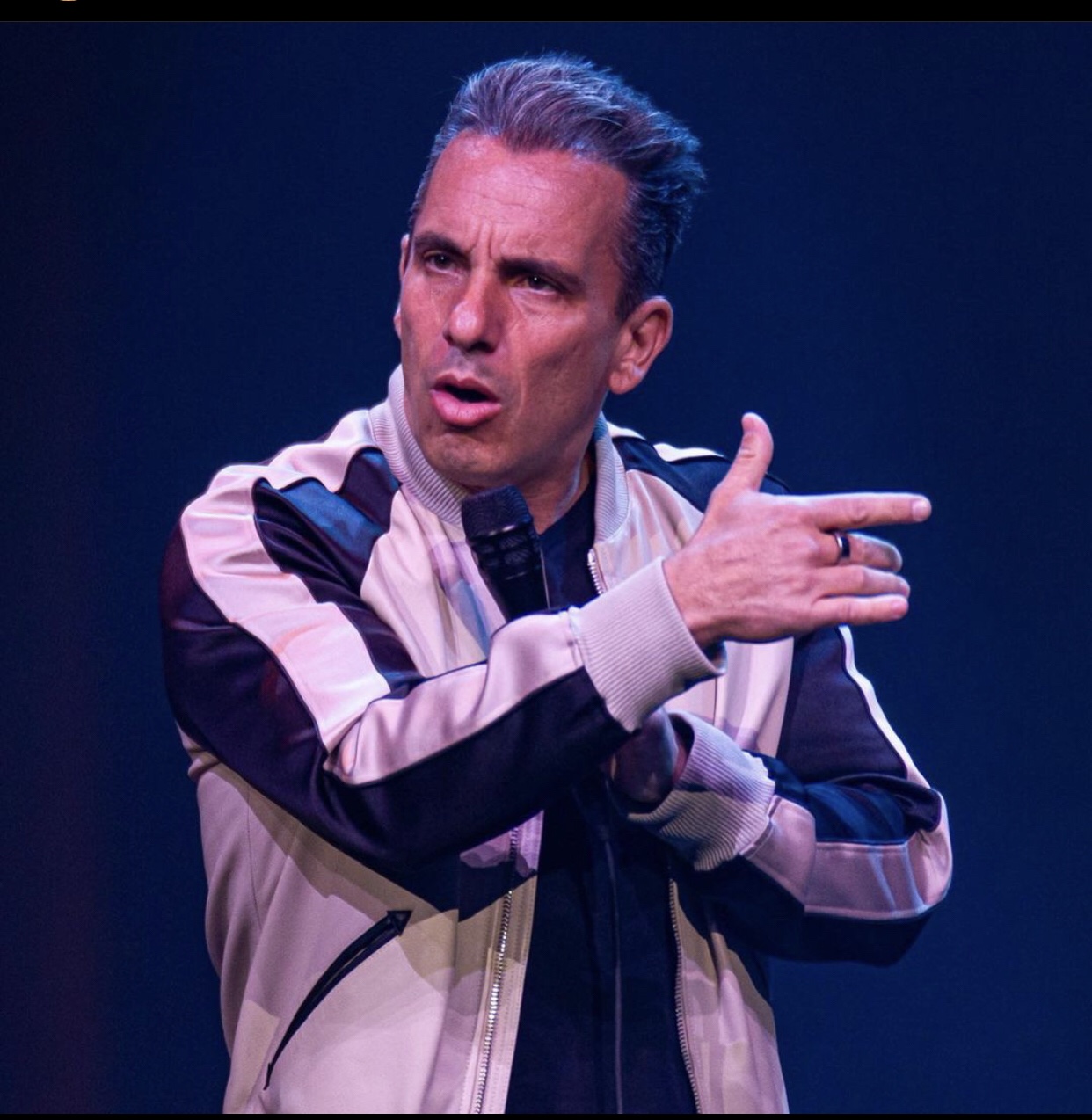 Sebastian Maniscalco (Italian: [mani’skalko]; is an American Stan-up comedian and Actor. He was born on the 8th of July 1973 in the Chicago suburb of Arlington Heights, Illinois, USA.

Maniscalco has so far released 5 comedy specials. Also, He has been featured in films such as The Irishman (2019), Green Book (2018), Playing Mobster Joe Gallo in the Latter.

Maniscalco was born on July 8, 1973, to Italian Immigrants. His Father’s name is Salvatore Maniscalco. He worked as a Hairstylist and Later Immigrated to the US with His Household from Cefalu, Sicily at age 15.

Also, His mother Rose Maniscalco worked as a secretary, and her family came from Naples, Campania, and Sicily.

Maniscalco has a degree in Communication Studies which he bagged from Northern Illinois University in 1995. As of then, he was the president of the Sigma Pi Fraternity Chapter.

The Comedian then moved to Los Angeles in 1988. While working as a waiter at the Four Seasons Hotel in Beverly Hills, California, from 1998 to 2005, Maniscalco performed at open mics in bars and bowling alleys.

It all began in 2005 when he regularly persons at The Comedy Store in West Hollywood, California.

He’s done a half-hour special for Comedy Central Presents and five hour-long specials since then. Also, his first special, “Sebastian Live” was released on the 2nd of June 2009.

Furthermore, His next three specials were aired on showtime, with what’s wrong with people (Released on Jan 5, 2012), Aren’t you Embarrassed?, recorded in Chicago, released on the 4th of November 2014, and Why Would you Do That which was tapped in NYC and released in 2016.

The American comedian was amongst the four comedians featured in Vince Vaughn’s Wild West Comedy Show.

Maniscalco was a guest star on the seventh season of Comedians in Cars Getting Coffee in 2016. On February 27, 2018, he released his memoir, Stay Hungry. On January 15, 2019, a Netflix special titled Stay Hungry was released.

In November 2019, Maniscalco starred alongside Robert De Niro, Joe Pesci, and Al Pacino in Martin Scorsese’s The Irishman as “Crazy” Joe Gallo. He also hosted the Behind the Irishman, a three-part companion podcast for the film, which debuted on December 2, 2019.

It was announced in June 2021 that Maniscalco will host a reality television show titled Well Done With Sebastian Maniscalco, which will premiere on Discovery+ on August 12, 2021, and in which he will be joined by friends and family to explore food culture and etiquette.

Four days after its premiere, the show was renewed for a sixth season of six episodes, which will begin on November 16, 2021.

During a podcast in August 2021, he announced that he was joining the cast of Illumination’s Mario film, playing the role of Spike from the game Wrecking Crew as Mario and Luigi’s boss.

How old is Sebastian Maniscalco?

Maniscalco got married to Lana Gomez in August 2013. The couples are blessed with two children: Serafina, a daughter named (after Maniscalco’s grandmother), born in May 2017, and a son named Caruso who was born in June 2019.

What is Sebastian’s net worth? – The American Comedian has an estimated net worth of  $20 Million.

Maniscalco is a multitalented person who has different sources of Income. He has earned greatly in Tv series comedy Central Presents, The Jay Leno Show, The Tonight Show with Jay Leno, The Late Show with Craig Ferguson.

How tall is Maniscalco?

Below are links to His movies on Netflix.

Watch Sebastian Maniscalco: Why Would You Do That? | Netflix

To Know More about Sebastian Maniscalco’s  Tours and his Tickets, You can visit Ticketmaster by clicking here

Below are some of the movies that Sebastian Maniscalco was featured in.

1. How many specials does Sebastian Maniscalco have?

ANS: He Has 5 Specials so far.

2. What is Sebastian’s net worth?

3. How much does Sebastian Maniscalco make per show?

4. How did Sebastian Maniscalco get rich?

ANS: Through Comedy, he also earns from his youtube channel

5. How much is Sebastian Maniscalco’s house?

The comedian and his artist wife, Lana Gomez, have just relisted their Beverly Grove home for $3.998 million.

The listing comes about a year after the couple spent $21.65 million on Gwen Stefani’s mansion, a 12,000-square-foot estate on two acres in the Beverly Hills Post Office neighborhood. (Info from 2020)

6. Who is Sebastian Maniscalco married to?

ANS: He is married to Lana Gomez

7. Who is Sebastian Maniscalco’s father?

8. How did Sebastian Maniscalco meet his wife?

ANS: They Met at the GYM

9. Where does Sebastian Maniscalco live currently?

10. Where can I watch Sebastian Maniscalco?

Fans can watch it live on Philo, a streaming service that offers over 60 of your favorite TV channels, including AMC,  History, Comedy Central, Discovery, and HGTV, among others.