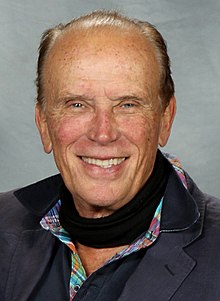 He is best known for playing Officer Alex J. Murphy in the cyberpunk action film RoboCop (1987). He also played the same role in the sequel RoboCop 2 (1990).

He has appeared in over 70 films and television series like The New Age (1994), Star Trek Into Darkness (2013), Mighty Aphrodite (1995), Naked Lunch (1991), amongst others. He received a Saturn Award Nomination for his role in RoboCop and an Academy Award for his role in the 1993 movie Partners. Peter hosted the program Engineering an Empire on the History Channel from 2005-to 2007. He began his career as a stage actor and holds a Ph.D in Italian Renaissance Art History from UCLA.

Peter Weller was born in Stevens Point, Wisconsin to Dorothy Jean (née Davidson; 1924-2002) and Frederick Bradford Weller (1922-1986). His mother was a homemaker while his father was a lawyer, federal judge and career helicopter pilot for the United States Army. Peter experienced a middle-class Catholic upbringing and spent many years abroad while growing up due to his father’s army work.

He attended Alamo Heights High School in San Antonio after his family moved to Texas from West Germany. After graduating in 1965, he enrolled at North Texas State University and received his Bachelor of Arts in Theater.

His acting career started after attending the American Academy of Dramatic Arts. He completed a Master of Arts degree in Roman and Renaissance Art at Syracuse University and he teaches ancient history occasionally there. In 2007, Peter began his Ph.D at UCLA in Italian Renaissance Art History and was awarded his doctorate in 2014.

Peter Weller’s journey began in the 1970’s as a theater artist and made appearances on Broadway productions such as Full Circle directed by Otto Preminger and Summer Brave which is a rewrite of William Inge’s play Picnic. He became a member of the much acclaimed Actors Studio about this time.

In the 1984 film Firstborn with Christopher Collet, Peter played the role of abusive boyfriend of Collet’s mother (played by Teri Garri). He made his debut in 1979 in Butch and Sundance; The Early Days.

He has also appeared in more than 59 films and television series such as: The Adventures of Buckaroo Banzai Across the 8th Dimension, RoboCop and RoboCop 2, Star Trek Into Darkness as Starfleet Alexander Marcus in 2013, Mighty Aphrodite, The New Age, Naked Lunch, e.t.c.

He appeared in Screamers (1995), a science fiction film based on the short story Second Variety by Philip K. Dick and directed by Christian Duguay.

In the 1977 episode of the TV series Lou Grant, he played the role of Donald Sterrer and also the role of the shuttle captain in Odyssey 5. His debut in TV film was in 1973 by playing the role of Lt. Fellows in The Man Without a Country. He appeared in few other film Partners which earned him a nomination at the the Academy Awards.

He has also made guest appearances in Star Trek: Enterprise episodes Demons, Terra Prime and Fringe. He also hosted a show Engineering Empire on the History Channel.

Peter Weller has directed various projects for Television such as episodes of Homicide: Life On The Street, Monk and three episodes of Odyssey 5. He has also directed eleven episodes of the Series Sons of Anarchy, one episode each season of Longmire, MacGyver and Magnum P.I.

He added his voice to the character of Bruce Wayne/Batman in the animated adaptations of the Dark Knight Returns and the titular character in Wilson’s Heart video game. He also voiced RoboCop in a series of commercials for KFC and Mortal Kombat II in 2019.

Peter got married to his longtime girlfriend, on June 24, 2006 to actress Shari Stowe at the Santa Maria Assupta Church in Positano, Italy. It was on his 59th birthday an celebrities like Marg Helgenberger and Carrie Fisher were in attendance. They have a daughter; Kate Linden Weller.

Peter has an estimated net worth of $8 million dollars.

He was nominated for Saturn Award For Best Actor- Robocop (1988), Genie Award for Best Performance by an Actor in a leading Role- Naked Lunch (1992) and others.

Peter played the role of a secondary antagonist in season five of Dexter. He was a corrupt cop that Joey Quinn hires to find dirt on Dexter Morgan, who he suspects is a criminal.

In seasons six and seven of Sons Of Anarchy, he plays the role of the ruthless ex-cop Charles Barosky.

4.What Is Peter Weller Famous For?

He is best known for his roles of Officer Alex J. Murphy in RoboCop and its sequel.

Peter is the son of Frederick Weller, who was a career army helicopter pilot, later a lawyer and a judge.

6.Who Is Crooked Cop In Sons Of Anarchy?