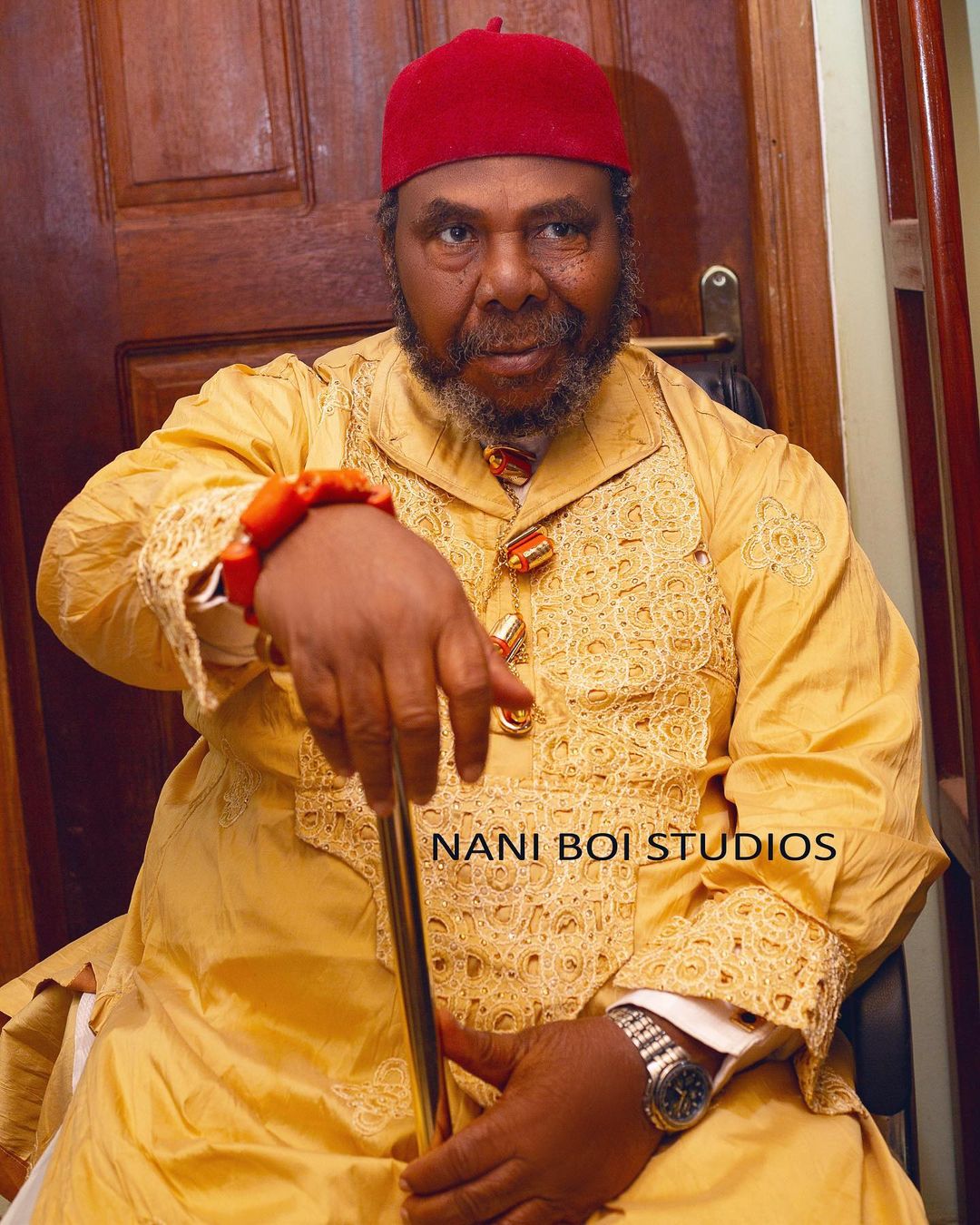 As one of the Giants actors of Africa, he has appeared in hundreds of movies over the years but his role as Okonkwo in the Nigeria Television Authority (NTA) adaptation of Chinua Achebe’s- best time selling novel, “things fall apart” brought him into the spotlight as a popular and talented actor. He is a Catholic and was honored as a Member of the Order of Niger(MON) by President Olusegun Obasanjo in 2003.

Chief Pete Edochie is also known as MON was Born on March 8, 1947 in Enugu State but was raised in Zaria, Kaduna State.

He completed his primary school education at St Patrick’s and St James Catholic Church, Zaria. And his secondary school at St John’s College. He participated in his school drama activities and his love for acting was developed.

He joined the Nigerian Railway Corporation after his secondary school before he relocated to England to further his education at the School of Journalism and Television.

Pete Edochie started his career journey in 1967 at the age of 20, when he joined the Nigerian Railway corporation after his secondary school education. He ventured into world of broadcasting. He worked as a broadcaster at Nigerian Broadcasting corporation.

He became a junior Program Assistant and was later promoted as a director and deputy managing director where he executed the duties of a Managing director on several acting capacities at the Broadcasting house, ABS.

He had a successful broadcasting journey but later quit his job due to some political affairs to venture fully into acting where he got his first role as Okonkwo in television series “things fall apart-  the best selling book of all times written by Achinua Achebe” in 1980.

This role got him a lot of recognition especially from BBC Channel that flew in to interview him which made him to win the international award. He has been featured in over 70 movies in movies Industry and television series.

In 2005, he was placed on a-year-ban along side other actors like Nkem Owoh, Genevieve Nnaji, Ramesy Noah, Omotola Jalade Ekeinde, Stella Damascus Aboderin and Richard Mofe Damijo known as Famous G8 by the Actors’ Guild of Nigeria  because of their huge salaries from the movie industry producers as top A-list celebrity status. It was actually a big loss to the Nigerian movie business which was later revoked to save the “face”.

In 2009, Pete Edochie was kidnapped and later released unharmed.

On September 2017, he created awareness when he endorsed wikimedia movement in Nigeria and use of Wikipedia among the older generation.

In 2020,he was featured in a movie titled “ Fatal Arrogance” as the main lead which generated a lot of controversy. He was been attacked by the Islamic Movement in Nigeria known as Shiites over his role, insisting that the movie was portraying their Union as a terrorist group.

Pete Edochie defended himself for not being responsible for any harm caused to them by the movie but the producers should be held responsible.

Chief Pete Edochie is Happily Married to Josephine Edochie and they are blessed with six kids (Five sons and a daughter). His two sons (Yul and Linc) took after his acting career and they are making big names in Movies industry.

Pete Edochie is one of the richest actors in Nigeria and his net worth is estimated $4million.

You can connect with Pete on his official social media Handle.

1 Where is Pete Edochie hometown?

2 Who is Pete Edochie’s wife?

Pete Edochie’s wife is Josephine Edochie. She is not an actress and mother to Yul and Linc Edochie.

3 Does Pete Edochie has a twin brother?

No! He doesn’t have a twin brother it was rumored he has a look-alike named Kingsley Abasili who was attracted to the media for his striking resemblance with the veteran actor in 2019.

Pete Edochie is still much alive and not dead.

Pete Edochie first son is Leo Edochie. He has his different career path and  his life off social media.