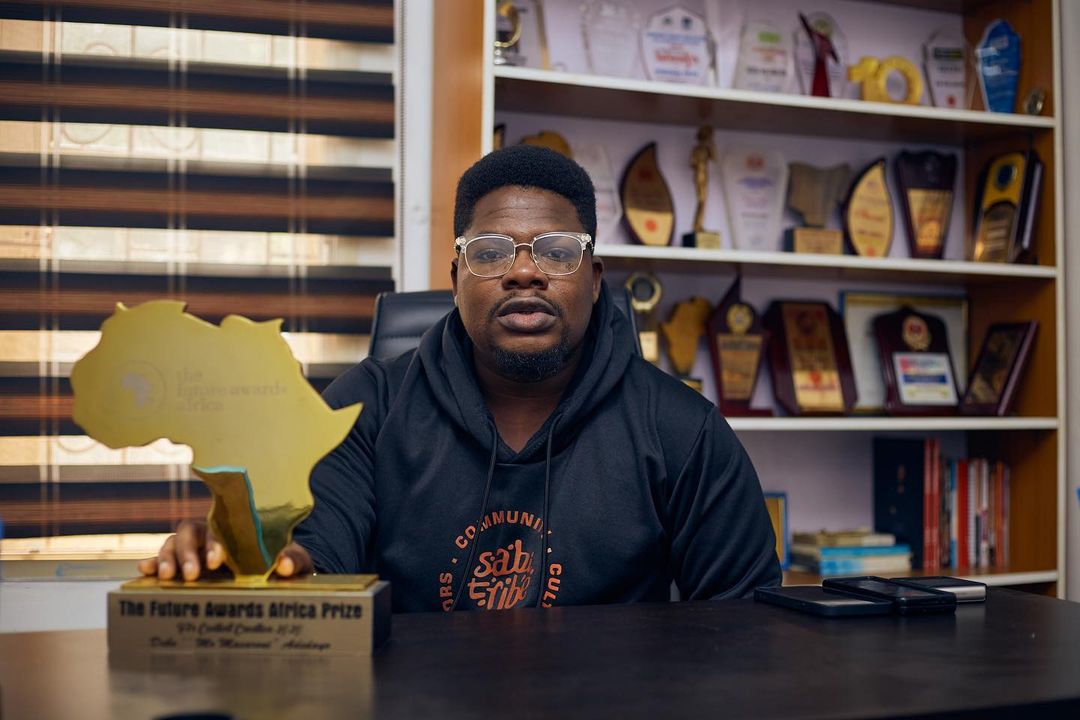 He is popularly known for his unique phrases, “ooin”, “you are doing well”, “freaky freaky”, “Are you there?” and “fantabulous”. Macaroni plays the role of “Sugar Daddy” with his Agbada outfit that makes him look like a real one.

Mr. Macaroni is the most sought-after social media comedian, who has built a huge fan base for himself on different social media platforms such as Instagram, YouTube, Facebook, Twitter, and his videos are loved by many Nigerians due to its uniqueness and funny characters.

Popular phrases: “ooin” and “you are doing well”.

Adebowale David Ibrahim Adedayo was born on 3rd May, 1992 in Ogudu, Lagos State.  He was born into a family of 10. His father is a journalist and mother an educationist.

He grew up in Magodo area of Lagos where he attended his primary school education at Tender care international Nursery and Primary school in Ojota, ogudu now at Magodo, isheri.

He gained admission into lead university, ibadan where he studied law but left in his second year due to his department accreditation’s issue. He later gained another admission to study law in 2011, at Houdegbe North American University, cotonou in the Republic of Benin but due to his activism and fight for justice, he was forced to leave the school

However, He decided to take his acting roles seriously and was featured in a few roles in movies but later studied Theatre Arts at the Afe Babalola University, Ado Ekiti, Ekiti State, but didn’t earn a degree due to many factors.

In 2013, Mr. Macaroni was admitted into the Redeemer’s university– a Christian-owned university by the Redeemed Christian Church of God in Osun state. He was involved in politics and was very popular in school. He graduated in 2018 earning a degree in Theatre Arts and Film studies. He went for his National Youth service Corps (NYSC) and got his NYSC certificate in March 5th 2020.

Mr. Macaroni started his career as an actor at Nollywood in 2014 before joining comedy. He was featured innumerous soap operas like Wala Adenuga Production (WAP), Family Ties, Papa Ajasco, Face-2-Face, and many more.

He mentioned that in his interview with Punch Nigeria where he said he had been acting for a long period of time. But at some point, there were no much roles coming before he decided to start his comedy career as “Macaroni series”.

Mr. Macaroni’s comedy skits reflect about real issues in Africa and some funny events. In his interview with Nigerian Tribune, he said his “sugar daddy” role represents about a good percentage of Naughty men that can’t control themselves and how they end up getting what they deserved in the end.

He said he was inspired by Pastor Chris Oyakhilome and whenever he mimics him everyone would laugh.

Mr. Macaroni started by playing the role of Old school teacher before switching to Sugar Daddy role. His career was really an impressive one after a company reached out to one of his producer for a short YouTube video and he has been making a lot of funny videos every week and has not run out of ideas. He has worked with a lot of comedians especially Kemz Mama, aka Mummy Wa as his wife.

Mr. Macaroni is the last child in the family of 10.  He is a strong activist and he was one of those that started the #Endsars protest. Mr Macaroni is currently engaged to mummy wa

MR. Macaroni Stands at a height of 5 ft 8 in

He is one of best social media influencers with over 800,000 followers on Instagram, YouTube and more. There have been a lot of speculations on his exact net worth. However, he has a net worth of $700,000.

Ponzi and Anyinla in 2021. He acted as Uchenna in Ponzi and as Bayowa in Anyinla.

He won the City people music as the comedy act of the year in 2017  future award Africa year as the best content creaton in 2020, and Afro x digitals award as the most influencer of the year in 2020.

in 2022 he won the future awards Africa Prize for Content Creation.

How to connect with Mr. Macaroni?

You can connect with Mr. Macaroni in this social media handles and website.

You all his videos, you can check him on his youtube channel @ Mr. Macaroni TV.

No, he is still single.

3.What state is Mr. Macaroni’s from?

He is from Lagos state.

4.Who is mummy Wa Mr Macaroni?

She is a comedy skit maker named kemi ikeseedu but currently engaged to Mr. Macaroni

5.Who is Mr. Macaroni wife?

He is not yet married.

7.What is Mr. Macaroni phone number?

We don’t have his phone number but you can still contact him through his social media handles listed.