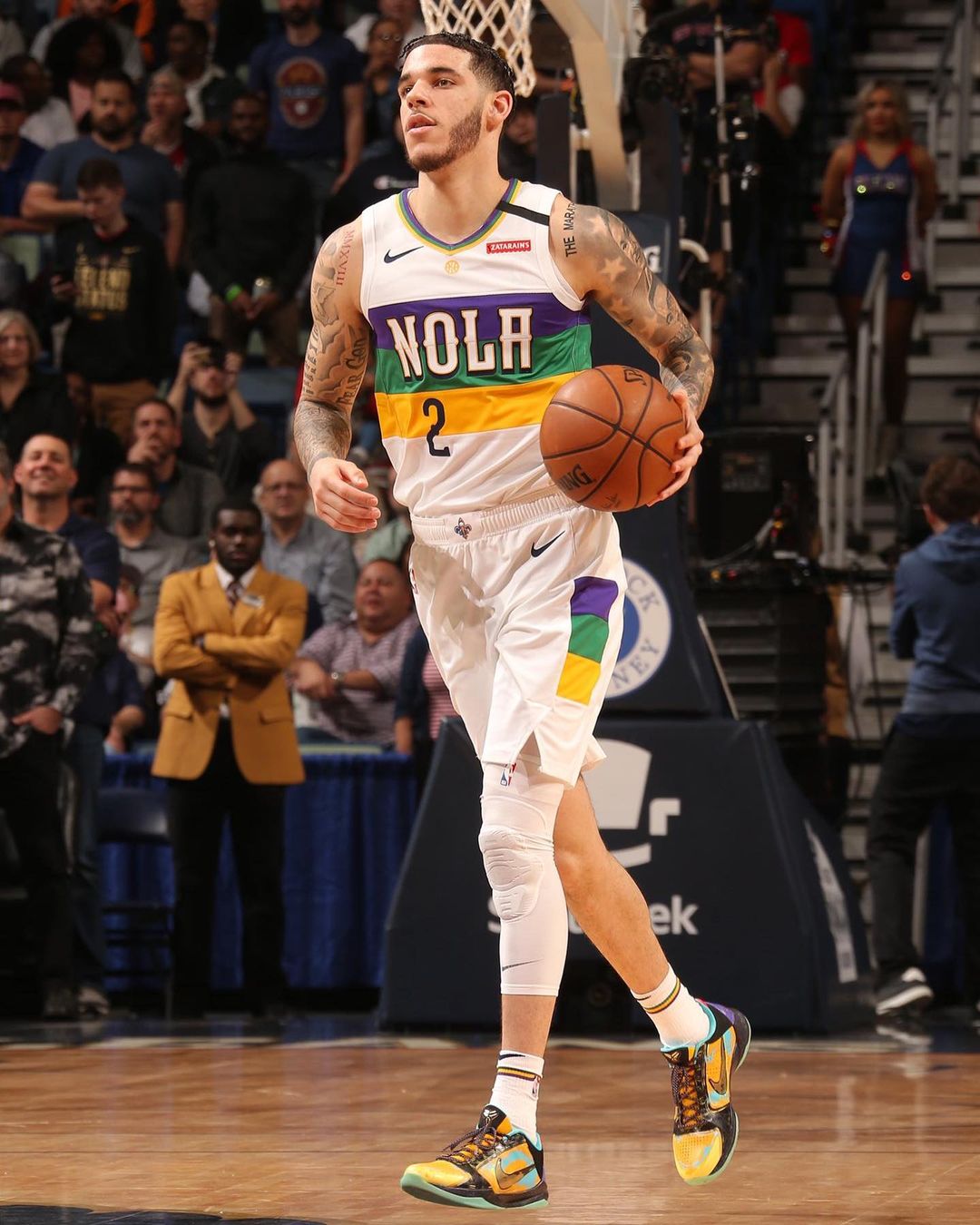 Lonzo Anderson Ball popularly known as Lonzo Ball was born on the 27th of  October,1997. He is a professional American basketball player for the Chicago Bulls of the National Basketball Association (NBA).

Famous as: A basketballer, A musician

EARLY LIFE AND HISTORY OF LENZO

Lonzo Anderson Ball was born in Anaheim, California, part of the Los Angeles metropolitan area, to LaVar and Tina Ball, who were both former college basketball players.

His Father LaVar who is  6-foot-6-inch played at Washington State for one season before transferring to Cal State Los Angeles, where the 6-foot-1-inch Tina played. His mother played for four years. His father was a  two-sport athlete,  who also played American football professionally for the London Monarchs in the World League of American Football.

Lonzo started playing basketball at the age of two. His idol was LeBron James, who he began following around age six when James was a first-year NBA player with Cleveland.

Ball has two younger brothers, LiAngelo and LaMelo Ball, who are both basketball players. Until they reached high school, the trio played together on teams coached by their father. Ball played basketball at Chino Hills High School in Chino Hills, California.

By the end of his senior year, Ball was rated as a consensus five-star recruit.He was ranked No. 4 overall in the 2016 class by both Rivals.com and ESPN, while Scout.com ranked him at No. 7.In November 2015, he signed a National Letter of Intent to attend the University of California, Los Angeles (UCLA), and played for the Bruins.

Ball is also a Rap music enthusiast and also has a musical career.

Ball was born to Tina and LaVar Ball. His younger brothers LiAngelo and LaMelo Ball played on the same high school team as he did in his senior year.

He began dating Denise Garcia his long-term partner after meeting her at Chino Hills High School. He and Denise had an on-again, off-again relationship. Both partners were blessed with a daughter named Zoey in July 2018, although the pair broke up in 2018.

After two years, they appeared to reconcile in 2020.

Ball is a rap music enthusiast; in his spare time he writes lyrics on his phone, He also frequently goes to a studio to record music. He has said that he would be a rapper if he was not an NBA player.

In 2017, Lonzo Ball and his family members debuted their own reality show on Facebook Watch called “Ball in the Family.”

Ball has a net worth of $12 million and earns a salary of $9 million. The  Chicago bulls  offered more than $21 million as an annual salary. Plus the $33 million from his first four seasons in the NBA.

Outside of his basketball endeavors, Lonzo Ball is known for his involvement in a range of other pursuits. He and his family have created a clothing and footwear company “The big baller” brand where he owns 51%, and they have also been featured in a reality show. Also, Ball is known for his fondness of music, and he has released a number of albums and singles.

Real Estate: In 2017, Ball had reportedly purchased a $5.2-million mansion in California. The Chino Hills residence was reportedly a “fixer-upper” when he purchased it just two months after the NBA draft of that year. The home sits on a plot of land that spans 3 acres, and it includes a 13,800-square-foot villa. Although the home needed work, it sported some notable features.

After being traded to the Pelicans in 2019, Lonzo sold a commercial property in downtown Los Angeles for $4.365 million. This industrial warehouse was originally purchased by Lonzo’s LLC in 2017 for $3.5 million. This warehouse spans 14,635 square feet and was used as a distribution center for the family’s clothing and footwear company.

Ball was rated a consensus five-star recruit by the major scouting services. In November 2015, he signed a National Letter of Intent to attend the University of California, Los Angeles (UCLA), and play for the Bruins.

As a freshman in 2016–17, he was one of 50 players named to the preseason watch list for the John R. Wooden Award, given annually to the top college player in the nation. In his first collegiate game against the Pacific, he had 19 points, 11 assists, and eight rebounds. Later in the year, Ball was named the MVP of the Wooden Legacy tournament, after he led UCLA to a win over Texas A&M in the championship game. He remained on the Wooden Award list in midseason.

In the Bruins’ regular-season finale, Lonzo Ball had a career-high 14 assists in a 77–68 win over Washington State, when he also broke Gary Payton’s 30-year-old Pac-12 season record for assists by a freshman. UCLA was seeded No. 3 in the NCAA Tournament and won their opening game 97–80 over Kent State. Ball had 15 points and three assists to surpass Larry Drew II’s school record for most assists in a season.He announced that he would declare for the 2017 NBA draft, where he was generally projected to be a top-3 pick.

For the season, Ball averaged 14.6 points, 7.6 assists, and 6.0 rebounds. He was the only player in the nation to average at least 14 points, six assists, and six rebounds, and was the first player in the conference since California’s Jason Kidd in 1993–94 to average at least 14 points, seven assists, and six rebounds. His 274 assists also passed Kidd (272) for the second-most in a season by a Pac-12 player, behind only Ahlon Lewis (294) of Arizona State in 1997–98.

Ball made 55.1 percent of his field-goal attempts and 41.2 of his three-point attempts to become the first NCAA Division I player since 1992–93 to make at least 70 percent from 2-point range and 40 percent from 3-point range. He was a unanimous first-team All-American, earning honors from the Associated Press, United States Basketball Writers Association (USBWA), National Association of Basketball Coaches (NABC), and Sporting News.

Additionally, he was awarded the Wayman Tisdale Award by the USBWA as the top freshman in the nation. Ball was the only freshman to be a finalist for the Wooden Award, Naismith College Player of the Year, and Oscar Robertson Trophy. He was also voted Pac-12 Freshman of the Year and was named first-team All-Pac-12. He also received an honorable mention for the Pac-12 All-Defensive Team.

He was selected with the second overall pick of the 2017 NBA draft by the Los Angeles Lakers. Where He and Brandon Ingram, their second overall pick from the previous year, headlined a young core for the Lakers. Lakers president of basketball operations Magic Johnson billed Ball as “the new face of the Lakers.

As a rookie in 2017–18 season, Lonzo played in 52 games, missing 30 games due to shoulder and knee injuries. During the second game of the season on October 20, 2017, he scored a then career-high 29 points, to go along with 11 rebounds and nine assists in a 132–130 win against the Phoenix Suns, falling one assist shy of becoming the youngest player to notch a triple-double in NBA history.

Lonzo Ball was upset during a game in 2018, and on July 17, 2018, he underwent arthroscopic surgery on his left knee to repair a torn meniscus.

Ball became one of the Lakers’ most dynamic defenders during the season as he picked up point guards full-court to create turnovers in the backcourt.  In late February, he traveled to Ohio to potentially undergo surgery. However, this surgery was not authorized by the Lakers, so the team informed him that his contract could be voided if he proceeded, and successfully talked him out of it. Originally, he was expected to be sidelined for four to six weeks, he was shut down for the rest of the season in March.

Ball playing for the New Orleans Pelicans in 2020.

Heading into the 2020–21 season, Ball was at his healthiest. The New Orleans Pelicans coach Stan Van Gundy placed him in a 3-and-D role, which he had never played before. On the 29th of January,  2021, Ball matched his then career-high seven three-pointers, and scored a season-high 27 points, in a 131–126 win over the Bucks.

He ended the season with career highs in scoring (14.6) 3-point percentage (37.8%), field goal percentage (41.4), and free throw percentage (78.1). In his new role, his assist average dropped to 5.7 per game, near the level he posted while playing alongside LeBron James with the Lakers. Ball became a restricted free agent during the offseason.

On the 8th of August, 2021, Ball was traded to the Chicago Bulls in a sign-and-trade deal. On the 20th of October, Ball made his Bulls debut, putting up 12 points, six rebounds, and four assists in a 94–88 win over the Detroit Pistons. On October 22, Ball put up a triple-double with 17 points, 10 rebounds, and 10 assists in a 128–112 win over the New Orleans Pelicans. On the 20th of  January, 2022, after he missed three games due to  a meniscus tear, the Bulls announced that Ball would have to undergo surgery on his left knee and miss 6-to-8 weeks.

Ball who is a Rap music enthusiast. In September 2017, Ball released his first rap single, “Melo Ball 1”, an ode to his youngest brother, LaMelo. That same month, he released the song “ZO2”, a dedication to his own brand of shoes. Which later became his lead single for his upcoming debut album.

The next month, Ball released another rap single titled “Super Saiyan”, which is a nod to the anime and manga series Dragon Ball Z. In the track, he compares himself to Goku, the main protagonist of DBZ. On February 15, 2018, Ball and his father participated in the Lip Sync Battle as competitors.

AWARDS AND HONORS  OF LONZO

Ball with his brothers during the national anthem

On the 20th of January 2022, Ball was diagnosed with a small meniscus tear in his left knee and is evaluating treatment options, Shams Charania of The Athletic reports.

Ball ‘s knee will undergo a procedure on his left meniscus injury this week and is expected to be sidelined for four-to-six weeks.

Ball recently resumed walking without the aid of crutches and appears to be trending toward a mid-to-late-March return to the Bulls lineup.

Bulls head coach Billy Donovan said that Ball has “ramped up” his running, but the point guard remains without a clear target date for a return to the lineup.

1. How much is Lonzo worth?

Lonzo’s Ball has a net worth of $12 million.

Lonzo has a small meniscus tear in his left knee

3. What Nationality is Lonzo?

Lonzo is an American by Nationality

Lonzo was born in Anaheim California

5. What is Lonzo’s Jersey Number?

Lonzo wears the number 2 for the Chicago Bulls