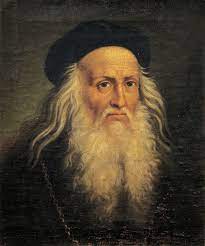 Leonardo da vinci was an Artist, Scientist and Inventor.He was Born in April 15, 1452 in Vinci, Italy. He Died in May 2, 1519 in Amboise, Kingdom of France.His Famous works includes Mona Lisa, The Last Supper, The Vitruvian Man Style/Period: High Renaissance Biography.

Leonardo da Vinci was an artist, scientist, and inventor at the time of Italian Renaissance. He is considered by many to be among the most talented and intelligent people so far. The term Renaissance Man (someone who does many things very well) was gotten from Leonardo’s various talents and is Presently used to describe people who are like Leonardo da Vinci.

Where was Leonardo da Vinci born? Leonardo da vinci was born in the town of Vinci, Italy on April 15, 1452. Just little about his childhood is known.His father was a rich man and he had many wives.When he was about 14years he became an apprentice to a popular artist called Verrocchio. He learnt different art works such as drawing, painting etc.Leonardo the Artist Leonardo da Vinci is refered to as one of the best artists since time in memorial. Leonardo suceeded in various areas both in painting, drawing, and sculpture.But most of his paintings are no more in existence.

He is known as the popular artist and he also became famous during his own time as a result of his paintings.About Two of his most popular paintings, and probably the best in the world,are the Mona Lisa and The Last Supper.His painting on Mona Lisa is also beyond the ordinary.Leonardo often keeps journals that contains his artistic works based on various subjects he studied.Some of Leonardo’s drawings were previews for future paintings, some were closer to scientific sketches,some were studies of anatomy. One of his popular drawing is the “Vitruvian Man drawing”. It is a picture of man with proficient parts based on the notes from the Roman architect Vitruvius.

His other popular drawings are a design for a flying machine and a personal portrait. Many of da Vinci’s drawings and journals were made in his quest for scientific knowledge and inventions. His journals contained over 13,000 pages of his observations of the world. Pictures and designs of war machines, helicopters,hang gliders, musical instruments, various pumps, were what he drew. He had interest in civil engineering projects and made designes on a single span bridge, which was a way to divert the Arno River, and movable barricades which would assist in protecting a city during an attack. Studies of the arm was done by Leonardo da Vinci. Majority of his drawings were based on anatomical studies. He studied the human body including many diagrams on human skeleton, tendons and muscles.He had full knowledge of various parts of the human body such as the arms, heart, and other visceral organs.

He did not only study about the human anatomy. Leonardo also had a deep interest in Animals like horses as well as frogs, monkeys, cows, including other animals.

Leonardo da Vinci lived from 1452-1519. He twas born in Anchiano, Tuscany (now Italy), close to the town of Vinci that gave the surname we now refer to him as today. During his season he was referred to as Leonardo or as “Il Florentine,” because be lived near Florence and was famous as an inventor, thinker and artist.

Leonardo da Vinci’s father was a lawyer and notary, and his mother who was a peasant farmer were never married as a couple.He was the only child they had together.But they had a total of 17 other children with their other partners,which were Leonard’s step siblings.

Leonardo’s parents never got married and his mother named Caterina got married to another man when Leonard was much younger and she started a new family.At age 5, he stayed in the estate in Vinci that was owned by his father’s family Ser Peiro, a lawyer and notary.Leonard’s uncle, who had a special likeness for nature which Leonard grew to share, also assisted in bringing him up.

Leonardo had no formal education except his fundamental reading, writing and math.But his father valued his artistic talent and took him at age 15 to be appreticed by the notable sculptor and painter Andrea del Verrocchio, of Florence. Close to a decade, Leonardo refined his painting and sculpting styles and trained in mechanical arts. At age 20, in 1472, the painters’ guild of Florence gave him membership, but he still stayed with Verrocchio until he became a competent student in 1478.Towards 1482, he started to paint his first approved work, The Adoration of the Magi, for Florence’s San Donato, a Scopeto monastery.

Although, he never finished that work, because he moved to Milan to work for the ruling Sforza clan, where he served as an architect,painter, engineer, and designer of court festivals and most remarkably a sculptor. The family requested Leonardo  to make a magnificent 16-foot-tall equestrian statue, in bronze, in honor of dynasty founder Francesco Sforza.Leonardo wasn’t stable on this work,he was practically on and off for 12 years, and in 1493 a clay model was made and set for display. A sudden war was about to take place,which made him repurposing the bronze earmarked for the sculpture into cannons, and the clay model was destroyed during the conflict after the ruling Sforza duke fell from power in 1499.

Though comparatively few of Leonardo’s paintings and sculptures were still in place but in part because his over all output was actually small.Two of his existing works are among the world’s most popular and esteemed paintings.

The first one is called “The Last Supper,” which he painted during his stay in Milan, from about 1495 to 1498. A tempera and oil mural on plaster, “The Last Supper” was made for the refectory of the city’s Monastery of Santa Maria delle Grazie. Which is also called “The Cenacle,” this work measures about 15 by 29 feet and is his only surviving artist’s fresco. It represents the “Passover dinner” when Jesus Christ addressed his disciples and said “One of you shall betray me.” One of the painting’s stellar features is each Apostle’s obvious emotional facial expression and body language. It portrays how Jesus is within them but yet set apart from his disciples which has influenced generations of painters.

When Milan was attacked by the French in 1499 and the Sforza family fled, Leonardo left there as well. Probably to Venice at first and later to Florence. There, he painted a series of portraits that included “La Gioconda,” a 21-by-31-inch work that’s well known as today as “Mona Lisa.” made  around 1503 and 1506.What the woman represents is yet to be known especially because of her mysterious slight smile.Over the years she was often thought to be Mona Lisa Gherardini, a courtesan, but recent scholars states  that she was Lisa del Giocondo, wife of Florentine merchant Francisco del Giocondo. Today, the portrait which is the only Leonardo’s portrait from that period that is still alive is present at the Louvre Museum in Paris, France, where lots of visitors are attracted to every year.

In the year 1506, Leonardo went back to Milan, together with a group of his students and followers including young aristocrat Francesco Melzi, who could also be referred to as Leonardo’s closest friend until he died. Ironically, the victor over the Duke Ludovico Sforza, Gian Giacomo Trivulzo approved Leonardo to sculpt his grand equestrian-statue tomb. That work too was not completed because Trivulzio altered his plans.Leonardo spent seven years in Milan, and also three extra years in Rome after Milan was no more accommodating because of political conflict.

Leonardo interests was far above fine art. He studied mechanics, anatomy, nature, physics, weaponry,architecture, and he frequently created accurate, workable designs for machines such as helicopter,the bicycle,submarine and military tank that would not come to fulfilment for years. He wrote Sigmund Freud, “like a man who awoke too early in the darkness, while the others were all still asleep.”

Various themes could be said to join Leonardo’s unrelated interests. Especially, his believe that sight was mankind’s most essential sense and that “saper vedere”(“knowing how to see”) was important to living all areas of life completely. He took science and art as subjects that complements each other rather than different disciplines, and thought that ideas generated in one realm could and should notify the other.

Maybe because of his complete different interests, Leonardo failed to finish an important number of his paintings and projects. He spent a alot of time involving himself deeply in nature, testing scientific laws, dissecting both human and animal bodies,thinking and writing about his observations. At a time in the early 1490s, Leonardo started filling notebooks relating to four broad themes which are painting, human anatomy,mechanics, architecture, Making thousands of pages of neatly drawn illustrations and fully written commentary, some of which (owning to left-handed “mirror script”) was uncomprehensible to others.

The notebooks often referred to as Leonardo’s manuscripts and “codices” are present today in museum collections after it was scattered after his demise.The Codex Atlanticus, for example includes a plan for a 65-foot mechanical bat, basically a flying machine majorly on the physiology of the bat and on the principles of aeronautics and physics. Other notebooks contained his anatomical studies of the human skeleton comprising of the brain,muscles,reproductive and digestive systems, which lead to a recent understanding of the human body to a large number of people. Although because they were not published in the 1500s, Leonardo’s notebooks had little impact on scientifc improvement in the Renaissance period.

Leonardo never got married, but he had alot of close relationships with other artists and colleagues in the profession including his assistants.

Leonardo left Italy in 1516, when French ruler Francis kindly honoured him with the title of “Premier Painter and Engineer and Architect to the King,” which gave him the opportunity to paint and draw at his convenience when he was living in a country manor house, the Château of Cloux near Amboise in France. Although accompanied by Melzi, to whom he would leave his estate, the bitter tone in drafts of some of his correspondence from this period revealed that Leonardo’s last years may not have been a very pleasant one. (Melzi would go on to marry and have a son, whose heirs, upon his death, sold da Vinci’s estate.)

Leonardo Da Vinci died at Cloux (now Clos-Lucé) in 1519 at age 67. He was laid to rest in the palace church of Saint-Florentin. The French Revolution almost demolished the church, and its remains were completely destroyed in the early 1800s, making it difficult to identify Leonardo da Vinci’s particular grave site.

The term Renaissance Man means a person who is good at what he/she does.Leonardo is known to be the greatest Renaissance man. Some persons claimed he invented the bicycle. He was a reasonable man and used a scientific approach when investigating a subject. His Vitruvian man is on the Italian Euro. About 15 of his paintings are still available. The Mona Lisa is also called “La Giaconda” meaning the laughing one. Leonardo was one artist who was very popular during his time for his paintings while he was still alive. But people have to realize presently the great artist he was.

1.He believed in physiognomy.

4.He was born out of wedlock.

5.He didn’t receive a formal education.

6.He was a vegetarian.

8.He was not a prolific painter.

9.He believed in physiognomy.

Leonardo da Vinci is dead but if this old art legend was still alive his age would be above 200 as he was not born on the same century as us all he was born on different century entirely.