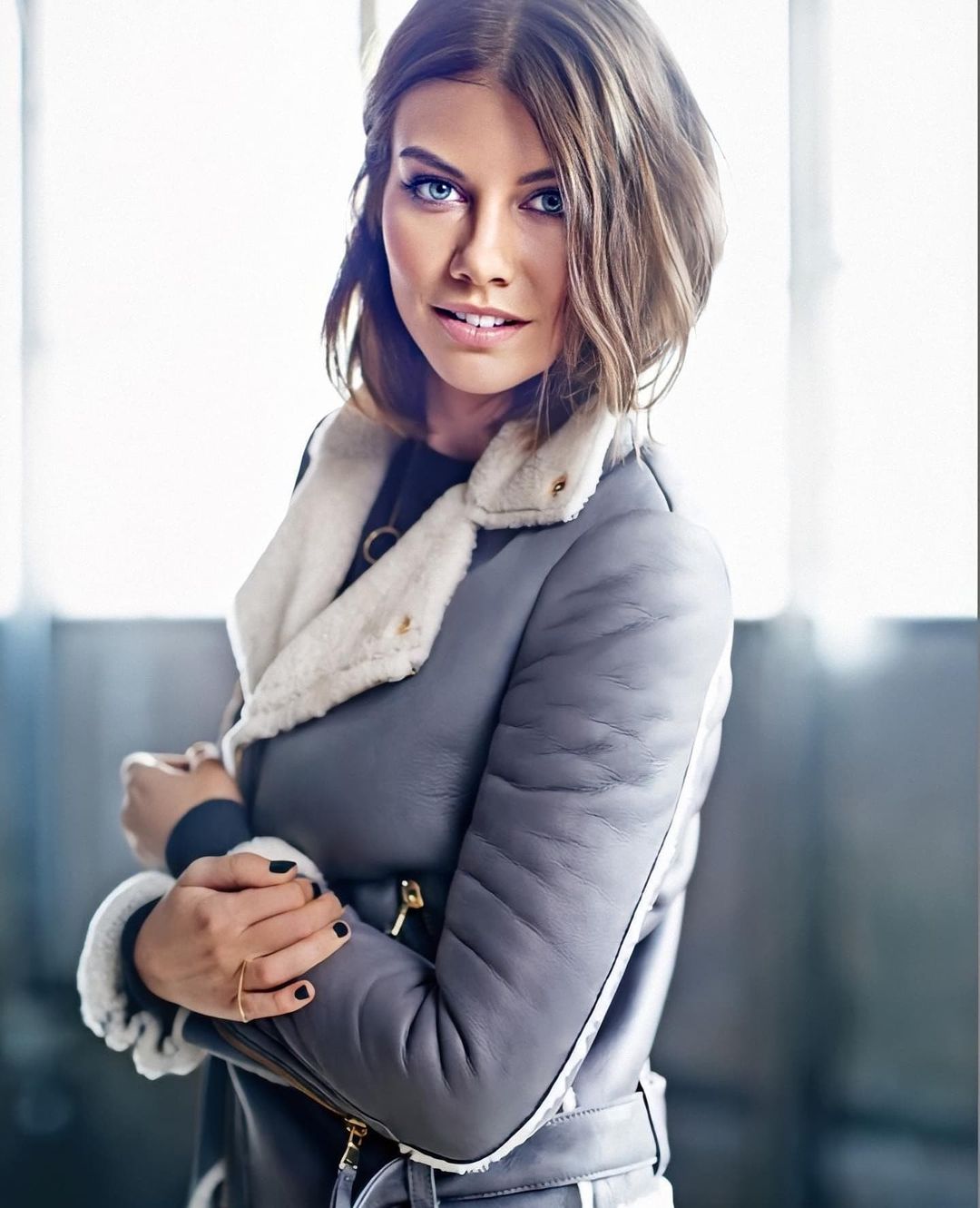 Lauren Cohan is a British-American actress and model, best known for her role as Maggie Greene in the AMC post-apocalyptic horror television series The Walking Dead.

She was born Lauren Storholm on the 7th of January 1982 in Cherry Hill New Jersey.   Lauren Cohan has double citizenship of the United Kingdom and the United States of America.

Lauren’s surname was legally changed to that of her stepfather, Cohan, and her mother converted to Judaism when she remarried.

Lauren Cohan converted to Judaism at age five and had a Bat Mitzvah ceremony. Cohan is the only child of her parents and has many younger half-siblings through her mother and father’s remarriages.

Through one of her sisters Alia, she has a niece, Isla. Cohan graduated from King Alfred’s College, Winchester (now the University of Winchester) with a Bachelor of Arts degree in drama and English literature although

She aspired to become a child psychiatrist in her teens before touring with a theatre company she co-founded at the university that puts up plays in the locality. Her talent was soon recognized by many who came to watch her plays.

However, she first completed her graduation and passed out of University before she took up work in London and Los Angeles,  California, working on several films as well as some non-commercial projects.

In 2006, after her film debut in Casanova (2005) as Sister Beatrice, Cohan starred in the sequel to Van Wilder (2002), Van Wilder: The Rise of Taj, as Charlotte Higginson.

Her next role was in the 2008 film Float. In February 2010, she was cast in Death Race 2: Frankenstein Lives, where she plays Death Race’s hostess and executive producer and a former Miss Universe winner.

She was the lead in the 2016 supernatural horror The Boy. Also in 2016, she appeared as Martha Wayne (Batman’s deceased mother) in Batman v Superman: Dawn of Justice and played Leila Steinberg in the 2017 biographical drama All Eyez on Me.

In 2007, Cohan garnered her first major supporting role – partially also described as a season lead – when she was cast for season three of Supernatural as Bela Talbot, a thief who procures valuable supernatural objects and sells them to very rich, very powerful people in the supernatural world.

The character appeared in six episodes of the series, her last in the penultimate episode of season three titled “Time Is on My Side”.  Cohan played the recurring character Rose, a 560-year-old vampire, in The Vampire Diaries.

In 2011, she joined the television series Chuck in a recurring role playing Vivian McArthur Volkoff, a “charming, sophisticated socialite” from the United Kingdom, and the daughter of primary villain, Alexei Volkoff. She also guest-starred on shows such as Archer, Cold Case, CSI: NY, Life, and Modern Family’ in the episode ‘Unplugged’, and ‘The Bold and the Beautiful.

Cohan starred in a pilot for The CW called Heavenly (2011) in which she played the lead character, Lily, an attorney who teams up with an angel; however, it was not picked up as a series.

In April 2011, Cohan was cast in her most notable role as Maggie Greene (later Maggie Rhee)on The Walking Dead, an AMC post-apocalyptic horror television series based on the comic book series of the same name. She first appeared in season two as a recurring character, but she became a series regular at the start of season three.

In 2012, she appeared as Lulu Pratt in the episode ‘British Hospital’ on ‘Children’s Hospital’. She also guest-starred in ‘Law and Order: Special Victims Unit as Avery Jordan in the ‘Legitimate Rape’ episode.

In 2014 she signed many projects. She was first seen in the main role in John Herzfeld’s drama film ‘Reach Me’ as Kate alongside the legendary Sylvester Stallone.

As well as she was Exo Stranger in the video game, ‘Destiny’. She also starred in the adult television animated spy sitcom ‘Archer’ in a recurring voice role as Juliana Calderon spanning four episodes. The same year, she played Stephanie in ‘Tim & Erica’s Bedtime Stories’.

The drama was the highest-rated series in cable television history in 2015. At the conclusion of the eighth season of The Walking Dead, Cohan completed her contract obligations as a series regular.

It was later reported Cohan had not reached an agreement to sign on for season nine as a main cast member due to a pay dispute, as she demanded an enhanced salary closer to the salaries of her male co-stars Andrew Lincoln and Norman Reedus. AMC refused, and Cohan began making herself available for TV pilots. Cohan eventually reached an agreement to appear in five episodes in the first half of season nine of The Walking Dead and departed the series in 2018.

In early 2018, in the midst of her contract negotiations with AMC regarding The Walking Dead, Cohan was cast as CIA operative Francesca “Frankie” Trowbridge in the ABC action comedy-drama Whiskey Cavalier.

Whiskey Cavalier was picked up to series in May 2018 and premiered on February 24, 2019.ABC did not renew the series for a second season. In October 2019, it was reported that Cohan would return to The Walking Dead as a series regular in the series’ eleventh and final season.

At the age of 22, Lauren decided to move permanently to Los Angles and took up the job of a waitress at ‘The Cat &The Fiddle’ which is a restaurant and pub at Sunset Blvd, Los Angeles.

Despite being beautiful and charismatic, Lauren never talks about her love life to the media.

However, according to some rumors, she would sometimes be associated with some of her co-stars, but there are no confirmed reports, but mere speculations.

Cohan splits her time and work between London and Los Angeles. Though she presently resides in Los Angeles for work, she has bought a home in London as well.

She lives an active life, apart from acting she is an avid reader, pianist, a singer and regularly trains in kickboxing and yoga.  Owing to her adulation for music she funds and supports the ‘Atlanta Music Project’ religiously. The organization renders education in music for the underprivileged youth in Atlanta.

In March 2022, Lauren Cohan has a net worth of $5 million, a fortune that she has managed to amass with her incredible acting capabilities and undeniable connection with the audience.

Van Wilder: The Rise of Taj

All Eyez On Me

The Bold and the Beautiful

TBA Twilight of the Gods