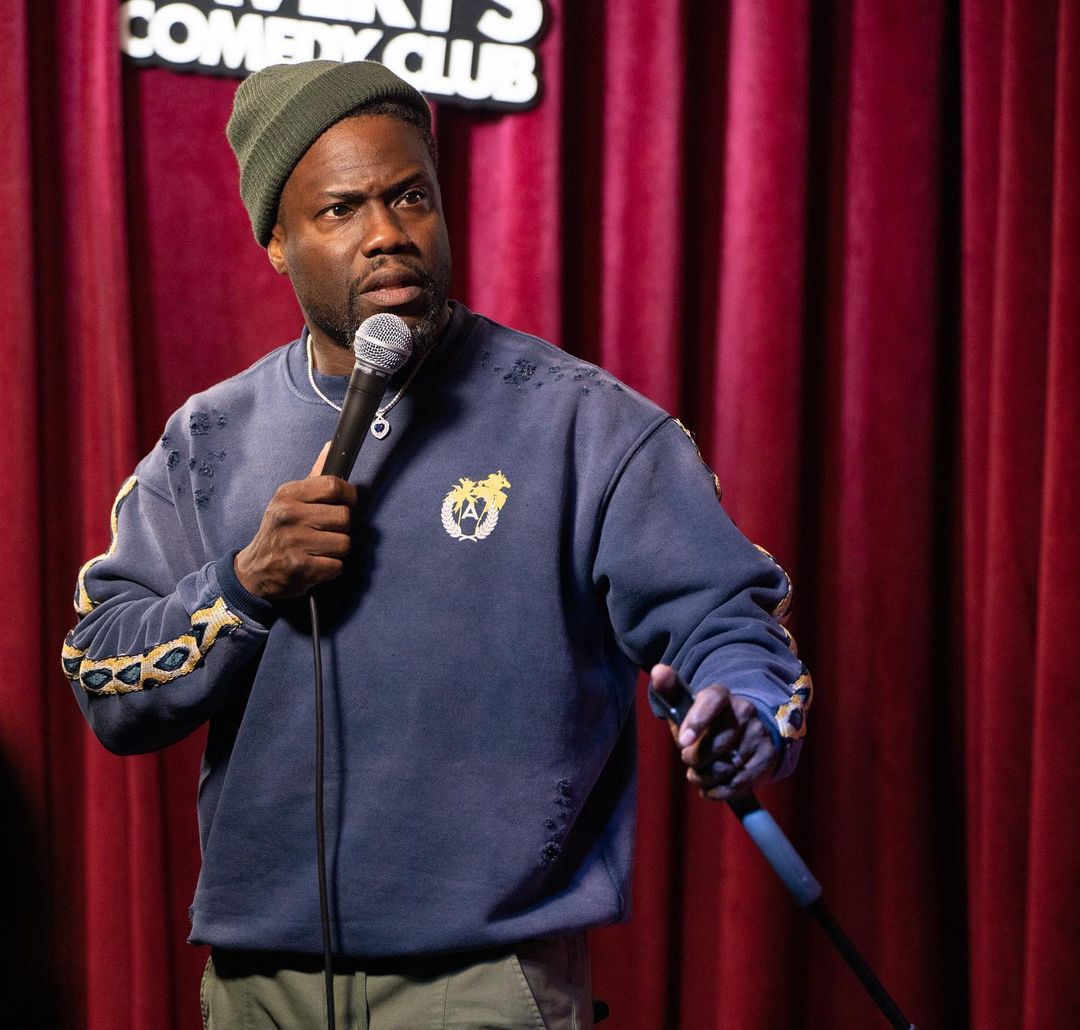 Kevin Darnell Hart popularly known as Kevin Hart was born on the 6th of  July, 1979. He is an African American stand-up comedian and actor. Born and raised in Philadelphia, Pennsylvania, Hart began his career by winning several amateur comedy competitions at clubs throughout New England, culminating in his first real break in 2001 when he was cast by Judd Apatow for a recurring role on the TV series Undeclared. He has 4 children from 2 marriages

Kevin Darnell Hart was born in Philadelphia, Pennsylvania on the 6th of July, 1979. He has an older brother named Robert. He and his brother Robert was raised in a single-parent household by his mother Nancy Hart, who was a system analyst for the Office of Students Registration and Financial Services at the University of Pennsylvania.

His father, Henry Witherspoon, was a cocaine addict who was in and out of jail throughout most of Kevin’s childhood, and Kevin used humor as a way to cope with his troubled family life and realized that he was inherently talented at performing comedy.

He is a Christian. After graduating from George Washington High School, Hart attended the Community College of Philadelphia for two years before dropping out and moving to New York City. He then moved to Brockton, Massachusetts, and found work as a shoe salesman which did not please him. He decided to focus on his career as a standup comedian.

Kelvin began pursuing a career in stand-up comedy by performing at an amateur night at a nightclub in Philadelphia. Over time, his expertise increased. He won a small role in the television series produced by Judd Apatow, called Undeclared. The following year, he made his debut in the cinema, in a film related to urban crime in the best style of comedy called Paper Soldiers.

Hart’s first gig was at The Laff House in Philadelphia under the name of Lil Kev, which did not go well.

His career suffered a slow start, as he was booed off stage several times, once even having a piece of chicken thrown at him.

After those initial unsuccessful shows, Hart began entering comedy competitions throughout Massachusetts and audience receptions of his performances eventually improved.

By chance, he found a mentor in a veteran comedian named Keith Robinson who began to coach him. As Hart’s stand-up career began to take off, ABC handed the young comic his own sitcom, The Big House.

Hart played himself on the show, a successful young man who is forced to leave his home in Hawaii and move in with some distant relatives in Philadelphia after getting ensnared in an embezzlement scheme. The outlandish storyline never caught on with audiences, however, and the show was canceled after just six episodes. Hart rebounded quickly.

In 2006, he released his first stand-up album, I’m a Little Grown Man, which further cemented his status as one of comedy’s best young performers. His second album, Seriously Funny, released four years later, proved to be even bigger. He then went on the ‘Laugh at My Pain’ tour in 2011 which was a huge breakthrough in his career.

The tour later turned into a concert documentary and Hart into a full-fledged star. Laugh at My Pain’ grossed $15 million and encompassed in 90 cities. The tour was one of the year’s most successful comedy tours. ‘Let Me Explain’ tour,  which was also released as features in movie theatres. He has released three comedy albums as well.

After winning several comedy competitions, Kevin Hart was cast in the TV series Undeclared, in 2000. Although the show only ran for a season, Hart received several movie offers. The comedian`s debut movie was the crime-comedy film Paper Soldiers, which was released in 2002. Between 2003 and 2010, he appeared in the 2003 comedy horror film“ Scary Movie 3″ which was a huge commercial success, and also “Death of a Dynasty”, in the 2004 comedy film“Soul Plane”, In the Mix, and Little Fockers(2010), Epic movie (2007), Death at a Funeral (2010), Super movie hero(2008), Not easily Broken (2008), whilst parallelly building his reputation as one of USA`s top comedians.

In 2012, Kevin Hart acted in one important role in The Five-Year Engagement and the hit film Think Like a Man. The film was a financial success earning more than $96 million, He hosted the MTV award show He also appeared in the sequel.

He had a cameo as himself in This Is the End. In 2013, Hart played a boxing promoter in Grudge Match and appeared in Exit Strategy as Mannequin Head Man. He also appeared in 35 and Ticking.  The following year, he co-produced and starred in the comic TV show Real Husbands of Hollywood, he also starred in ‘Workaholics’ and ABC comedy modern Family’.

The year 2014 saw the comedian team up with Ice Cube to act in the commercially successful Ride Along, and also “About last night. A year later, Hart starred in the hit film Get Hard with Will Ferrell, Hosted the Comedy Central Roast of Justin Bieber, and in the movie The Wedding Ringer, the same 2015 “Get Hard” was released. On April 9, 2015, Hart embarked on a comedy world tour titled the What Now?

Tour at the AT&T Center in San Antonio, which concluded on August 7, 2016, at the Columbus Civic Center in Columbus, Georgia. On July 16, 2015, Universal Pictures announced that Kevin Hart: What Now?, a stand-up comedy film featuring a performance of Kevin Hart’s What Now? Tour, would be theatrically released in the United States on October 14, 2016. The show was filmed live on August 30, 2015, in front of 53,000 people, at Philadelphia’s Lincoln Financial Field.

In the year 2016, Kevin Hart starred in Ride Along 2 as well as in the spy comedy film Central Intelligence, alongside Dwayne Johnson, “The secret Life of pets”.In 2017, Hart voiced the character of George Bernard in the animated movie Captain Underpants: The First Epic Movie and played the role of Moose Finbar in the movie Jumanji: Welcome to the Jungle, He played the main role in the comedy-drama “Upside”.

In 2018, he produced his first film under his production company HartBeat Productions, Night School.

However, In October 2018, it was announced that through his production company, he has signed a first-look deal with Nickelodeon. Under the deal, Hart and his HartBeat Productions banner will develop and produce live-action, scripted kids content for the network.

Kelvin Hart also has a first-look film deal with Universal Studios.In 2019, Hart’s film The Upside, his first headlining role in a drama, was theatrically released. It also starred Bryan Cranston and Nicole Kidman. Hart also reprised his role of Snowball in the sequel The Secret Life of Pets 2.

In 2020, his series Die Hart premiered on Quibi on July 20 and had a great first weekend, with numerous households streaming the series. On June 9, ROKU and Hart’s multi-platform comedy brand Laugh Out Loud the series’ return to Roku with a second season.

In addition to returning to his starring role, Hart will also executive produce the second season; Laugh Out Loud CEO and Hart’s longtime business partner, Jeff Clanagan, will serve as a producer on the project. In 2021, Hart starred in Fatherhood, a drama about a man whose wife dies shortly after childbirth, leaving him to raise their daughter on his own. It premiered on Netflix on June 18, 2021.

Hart’s comedy has been compared to “Kings of Comedy”. Hart was the host of the Comedy Cent.

The comedian has a net worth of $200 million

Kevin Hart loves cars, and for his 40th birthday, he bought himself a 1970 Plymouth Barracuda, custom-made by Speedkore, which racked up to a total of $800,000.The previous year, Hart gifted himself a Ferrari 488 worth roughly $300,000. His precious cars are carefully parked in His 900+ square-foot garage, with a 250 square-foot 2nd story pool house above; which cost him in the neighborhood of $170,000.

Besides cars, holidays, and mansions, he has an eye for designer watches. He owns 6 Rolex’s that are part of his luxury watch collection; totaling 16 watches.

Hart’s relationship with his father improved after his father recovered from his addiction. Hart said, “My dad said I was supposed to be on drugs. I was like, ‘Dad, shut up, but then I thought about it, and it was stupid, but it made sense.

He was saying that basically he was my example to never go down that road.”Hart also talks about his mother in his stand-up routine, portraying her as a loving, yet intimidating woman. She died from cancer in 2007.

Kevin and Torrei Hart (a comedienne and actress) tied the knot in 2003. but filed for divorce in February 2010 and officially divorced in November  2011, citing irreconcilable differences.

Hart requested joint custody of their two children, daughter Heaven Leigh who was on, born March 22, 2005, and son Hendrix, born on October 8, 2007.

Torrie Hart claims that Eniko Parrish, an American model, was one of the reasons for their separation. Kevin Hart denied these allegations and claims to have only started seeing Parrish after he and Torrie Hart filed for divorce.

On the 18th of August,  2014, Hart proposed to Eniko Parrish an American model. They got married on August 13, 2016, near Santa Barbara, California.

Their son Kenzi was born on November 21, 2017. On December 15, 2017, Hart publicly admitted to having cheated on his wife while she was pregnant with their son.Their second child together, a daughter named Kaori, was born on September 29, 2020.

Death of a Dynasty

Death at a Funeral

Kevin Hart: Laugh at My Pain

This Is the End

The Secret Life of Pets

Jumanji: Welcome to the Jungle

The Secret Life of Pets 2

Jumanji: The Next Level

The One and Only Dick Gregory

The Man from Toronto

Help Me Help You

Kevin Hart: Don’t F**k This Up

Jeopardy! The Greatest of All Time

Live in Front of a Studio Audience

Awards and nominations  by Kevin Hart

Outstanding Actor in a Short Form Comedy or Drama Series

Artist of the Year

Behind the Voice Actors Awards

As the voice of “George Beard”.

International Star of the Year

Comedy Star of the Year

Favorite Voice from an Animated Movie

Conan O’Brien’s Ride Along with Ice Cube and … More

You can connect with the comedian on

1. How did Kevin Hart get Rich?

Kevin got rich from his acting and comedy  career

2. How much does Kevin Hart make a day?

The star makes approximately $114000 per day

3. How many kids does Kevin Hart have?

4. Who are Kevin Hart’s Siblings?

5. Is Kevin Hart a billionaire?

7. Where was Hart born and raised?

Hart was born and raised in Philadelphia, Pennsylvania, U.S.

8. When did Hart start acting?

He started acting in 2002 his debut movie was paper solider

He is known as a Standup comedian and actor

Kevin is currently married to  Eniko Parrish an American model.

He has a net worth of approximately $200 million