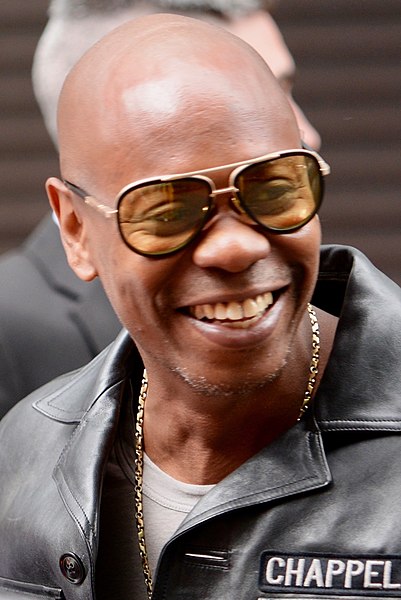 David Khari Webber Chappelle, born on August 24, 1973 in Washington, D. C, U. S is an American stand-up Comedian and actor. He is best known for his co-created, written satirical comedy series Chappelle’s Show (2003-2006). After quitting the show, he returned to performing stand-up comedy across the U. S. By 2006, Esquire called David the “comic genius of America”. He was ranked No. 9 by Rolling Stone in their “50 Best Stand Up comics of All Time” .

Dave has made appearances in several movies such as Robin Good: Men in Tights (1993), The Nutty Professor (1996), Blue Streak (1999), amongst others. He had his first lead role in Half Baked, a 1998 comedy film which he co-wrote. He has received several numerous accolades, including five Emmy Awards, three Grammy Awards and the Mark Twain Prize  for American Humor.

David Khari Webber Chappelle, was born in Washington, D.C,USA to William David Chappelle III and Yvonne Seon (née Reed, formerly Chappelle). His father was a professor of vocal performance and Dean of students at Antioch College in Yellow Springs, Ohio; while his mother worked for Congolese Prime Minister Patrice Lumumba. Chappelle has a stepmother and a stepbrother.

He was raised in Silver Spring and had to study at Woodlin Elementary School. During his school days, he got greatly inspired by Comedians Eddie Murphy and Richard Pryor. His parents being politically active, gets visitors like Pete Seeger and Jonny Hartman.

When he was very young, his parents got divorced. He went on to stay with his mother and worked as an usher in Ford’s Theater while in high school. For a short while, he attended DC’s Eastern High School before transferring to Duke Ellington School of the Arts, where he studied Theater Arts and graduated in 1991.

Dave started his first Comedy act at the young age of 14. He moved to New York City to pursue a career as a comedian. He was booed off the stage after he performed at Harlem’s Apollo Theater. He made a name for himself on the New York comedy circuit and honed his craft at places like the Boston Comedy Club on West 3rd Street in late 1994.

His appearance in Russell Simmons’ Def Comedy on HBO allowed his popularity to truly begin rising, allowing him to become a regular guest on shows like Late Show With David Letterman, Politically Incorrect, The Howard Stern Show and Late Night with Conan O’Brien.

He made his film debut with Robin Good: Men in Tights as Ahchoo at the age of 19. In the same year, he turned down the role of Benjamin Buford “Bubba” Blue in Forrest Gump as he was concerned about its success. He also played another supporting role in Getting In.

In 1995, he appeared on an episode of Sitcom Home Improvement alongside Jim Breuer. They were so popular that ABC decided to give them their own spin-off sitcom Buddies. However, Jim was fired and the show had disappointing ratings

In 1996, he appeared as a stand-up insult comic in the comedy The Nutty Professor alongside Eddie Murphy, who is an idol and a big influencer to him. In 1997, he had a minor role in Con Air and then got a major role in Half-Baked the following year.

After its success, he appeared alongside Tom Hanks in the film You’ve Got Mail. He appeared in the 1999 Martin Laurence film, Blue Streak. In 2000, Dave first recorded his slot on HBO Special, Dave Chappelle: Killin’ Them Softly.

From 2003 to 2006, Chappelle’s show was aired on Comedy Central, which landed him a multi-million contract. He promoted the work of other black comedians as well, especially that of Paul Mooney and Charlie Murphy. The production was cancelled when he left on a trip to South Africa.

He toured a number of cities in the United States to promote the documentary film Dave Chappelle’s Block Party which was directed by Michel Gondry.

The movie features artists like Kanye West, Dead Prez, Jill Scott, The Roots and Most Def. It was released by Rogue Pictures, on March 3, 2006 and it grossed a total of $11.7 million on a $3 million budget.

In April 2007, Dave broke comedian Dane Cook’s record of stand-up which lasted for 3 hours 50 minutes at the Laugh Factory Sunset Strip Comedy Club. Cook reclaimed the record after Dave broke another six hours and 12 minutes to a time of seven hours. He appeared on Inside the Actors Studio twice, from 2008 to 2013 in celebration of the show’s 200th episode.

In August 2013, Chappelle returned to full-time touring stand-up, as a headliner when he was featured during Oddball Comedy & Curiosity Festival. In June, 2014 Dave made his first major New York City appearance in eleven years at Radio City Music Hall. In 2015, he appeared in the Spike Lee film Chi-Raq, which is his first film role in 13 years.

On November 21, 2016 it was announced by Netflix that three new stand-up comedy specials from Chappelle would be released in 2017, with him being paid $20 million per Special. In December 2020, Chappelle’s Iron Table Holdings Company purchased a fire station near his Yellow Springs, Ohio home, with plans to convert it into a comedy club. He starred in his sixth and final Netflix special The Closer, on October 5, 2021.

In the early hours of May 4, 2022, Dave was attacked on stage by a member of the audience at the Hollywood Bowl in Los Angeles, California. The attacker was subdued by security and a replica handgun containing a knife blade was found on him.

Dave donated his time to Seeds of Peace International Camp in 2004. The camp which is located in Otisfield, Maine, wins at bringing young leaders together from communities in conflict. He also supports his high school, Duke Ellington School of the Arts financially. The school’s auditorium was said to be renamed in his honor.

In 2001, Dave Chappelle got married to his longtime girlfriend Elaine Mendoza Erfe. They have three children Sulayman Chappelle (son), Ibrahim Chappelle (son) and Sanaa Chappelle (daughter). They live on a 65- acre farm near Yellow Springs, Ohio. In 1991, Dave converted to Islam.

Dave earns a salary of $5 million+. His net worth is $65 million dollars.

Some of his quotes are:

Block party is a documentary film hosted and written by Dave Chappelle. The film follows Chappelle during the summer of 2004, when he threw a block party on the corner of Quincy Street and Downing Street in the Clinton Hill neighborhood of Brooklyn, New York City.

Killin’ Them Softly is a 2000 American stand-up comedy television film directed by Stan Latham and written by Dave Chappelle.

Dave is married to Elaine MendozaErfe. She was born on August 31, 1974 and is of Filipino descent.

7.How Long Is a Dave Chappelle Show

His Comedy sets are generally about 90 minutes long.

On November 21, 2016, Netflix announced that they would be releasing three new stand-up comedy specials from Chappelle in 2017 and he will be paid $20 million per Special.

9.Does Dave Chappelle Have a Daughter?

His daughter is Sanaa Chappelle. She was born in 2009.

He is listed in Forbes ‘Celebrity 100’ list and is ranked no.43 in the list of ‘Comedy Central Presents: 100 Greatest Stand-Ups of All Time’, by Comedy Central.