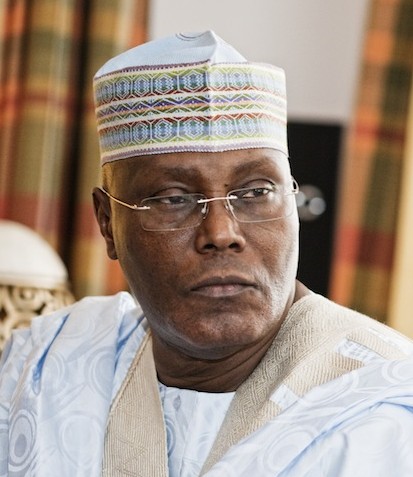 Atiku Abubakar (GCON) is an avid business man, a former Vice President of Nigeria (1999 – 2007) during Obasanjo’s regime, and one of the richest politicians in Nigeria.

Atiku Abubakar was born on the 25th of November 1946, to Garba Abubakar, and Aisha Kande, in a town called Jada, then under the British Cameroons, but the town later joined the federal republic of Nigeria in 1961.

His father was a Fulani dealer and rancher. He was named after his grandfather Atiku Abdulqadir.

Atiku Abubakar, became the only child of his parents, when he lost his younger sister.

Atiku Abubakar attended the Nigeria Police college in Kaduna briefly, but left because he couldn’t present a mathematics o’level results.

After working briefly at the regional ministry of finance as a tax officer, he gained admission into the School of Hygiene in 1966.

He got his Law diploma from the Ahmadu Bello University, institute of Administration. After his graduation in 1969, he joined the Nigerian Custom Service.

Since then, Atiku has been contesting in elections, for the position of the president, till date. Currently he is the presidential candidate for the People’s democratic party (PDP).

He resigned from the Nigerian Custom Service in April 1989, to become a full time business man, and a politician.

His businesses include: Adama breavages limited, a company that produces drinks in Yola, The American University of Nigeria (AUN), a private America style university, the second of it’s kind in sub Saharan Africa, and a creature feed processing plant.

Atiku Abubakar prides himself as the biggest employer of labour in the private sector, with over 50,000 employees across all his businesses and investments.

Atiku Abubakar has 4 wives, and 28 children. He is a practicing Muslim. Three of his four wives are from the three major ethnic groups in Nigeria (Hausa, Yoruba, and Igbo).

Atiku Abubakar has a net worth of $1.8 billion (625. 5 billion naira) and countless valuable assets. This net worth, he amassed for his various businesses and political ventures. This net worth makes him one of the richest men in Nigeria.

Where is Atiku from?

Atiku Abubakar is from Jada, in Adamawa State

Atiku Abubakar  is one of the wealthiest politicians and business men in Nigeria. With his numerous business ventures and investments, he is one of biggest employer of labour in the private sector.

Currently he is the presidential aspirant for the People’s democratic party (PDP).