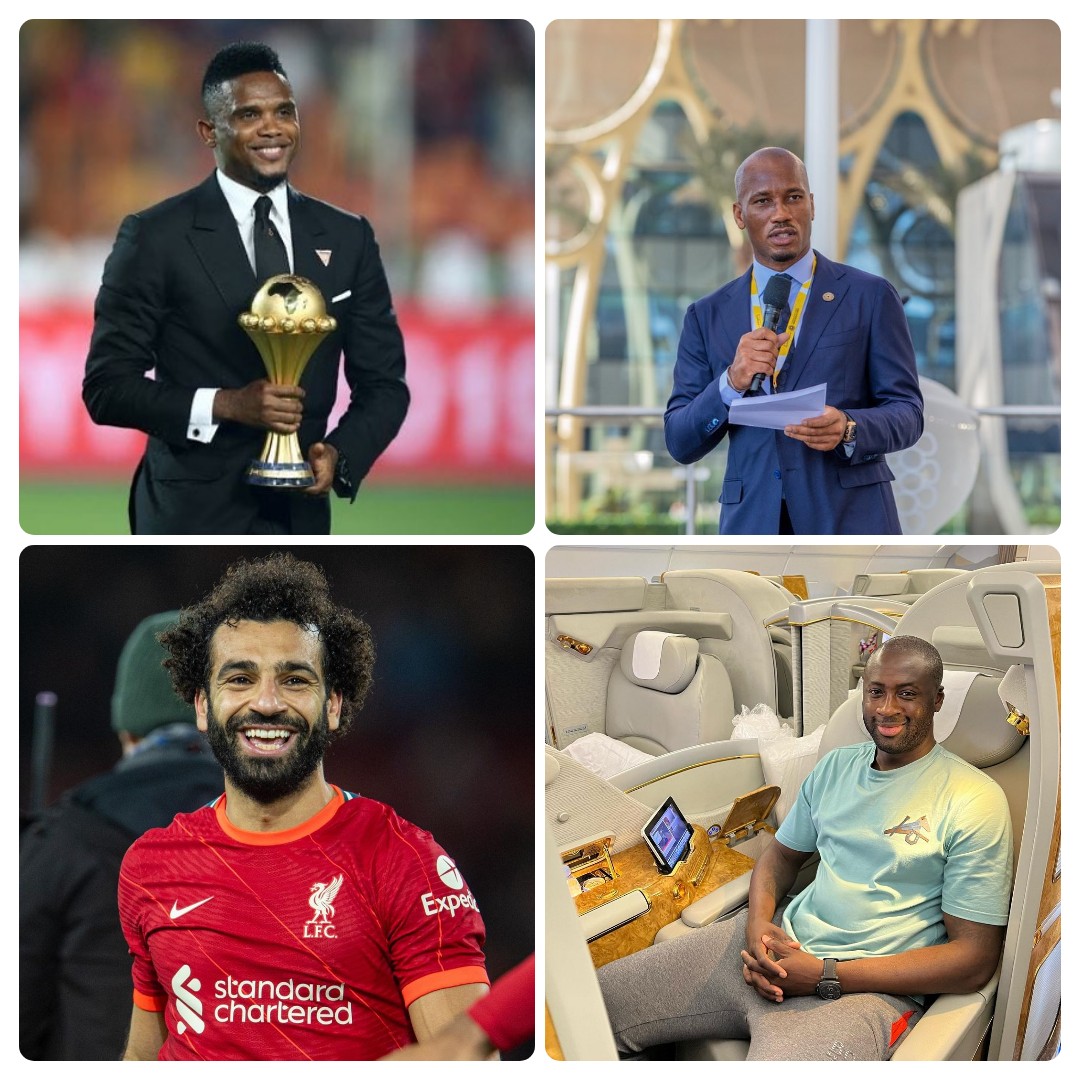 It is no longer news that some of the world’s best football players are from Africa and still making history in the world of sports.

Top 10 Richest African Footballers and their Net Worth 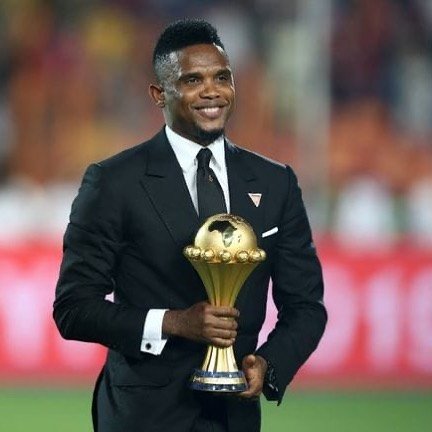 Samuel Eto’o Flis (born on 10 March 1981 in Douala, Cameron) is a Cameroonian footballer, World former best striker and Currently, and the president of Cameroonian Football Federation, emerged on 11 December 2021.

As one of the world’s top footballers, he has achieved prodigious success and also built solid grounds in the world of sports. He was named the African greatest of all time after winning the Africa Player of the Year Awards four conservative times in 2003, 2004, 2005, and 2010.

In 1997, he was scouted by Real Madrid talent hunts and moved with them at the age of 16 and played for them. He had played for other clubs like Mallorca in 2000, and Barcelona in 2004- he was one of the key members of Barcelona’s attack alongside Ronaldinho, Messi, and Thierry Henry. 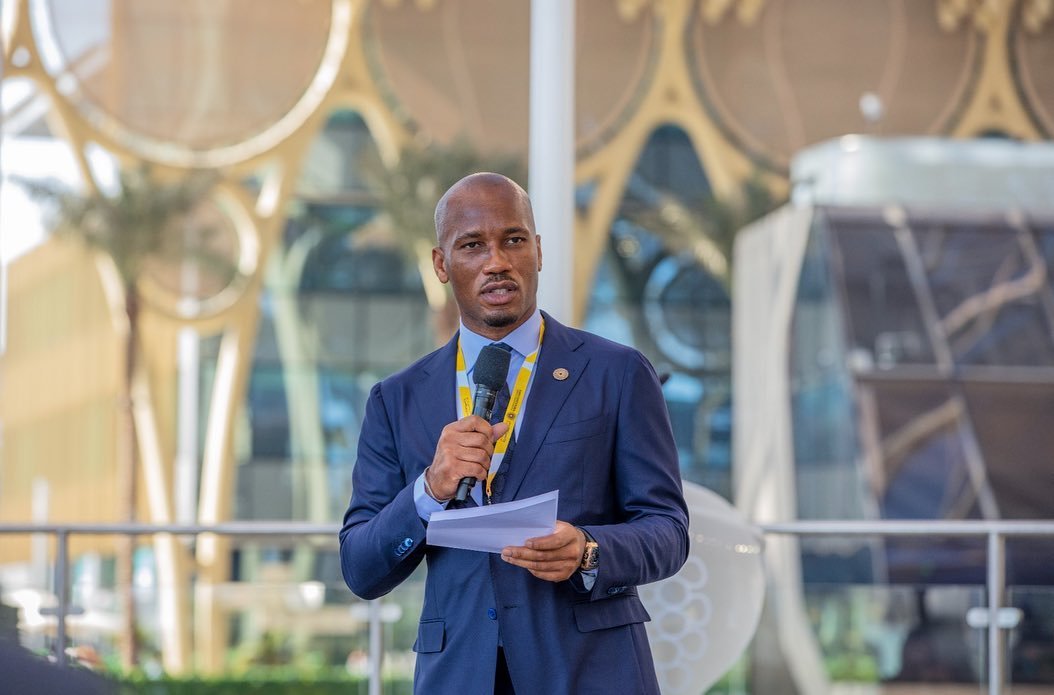 He is an all-time top scorer and former captain of the Ivory Coast national team. Drogba was best known for his career in the Chelsea club and won the Africa Footballer of the Year twice in 2006 and 2009.

He finished the 2002-2003 season with 17 goals in 34 matches for Ligue 1 side Guingamp before moving to Olympique de Marseille as the third highest scorer in the same season with 19 goals and appeared in the 2004 UEFA Champion league final. He moved to Chelsea in July 2004 for a club record $ 24 million fees, making him the most expensive Ivorian player in history.

He was earning a whopping $105,000 a week from the club. In his first season at the club, he helped them win their first league title in 50 years, and a year later he won another Premier League title.

Drogba is presently the club’s fourth highest goal scorer of all time, In 2012, he became the first African player to score 100 Premier League goals and helped the club win the 2012 UEFA Champions League Final. He had also played for other clubs like Shanghai Shenhua in 2012- he played for them for 6 months. Turkish club Galatasaray in 2013, Canadian club Montreal impact in 2015, Phoenix Rising in 2017, and retired at the age of 41 from International football. 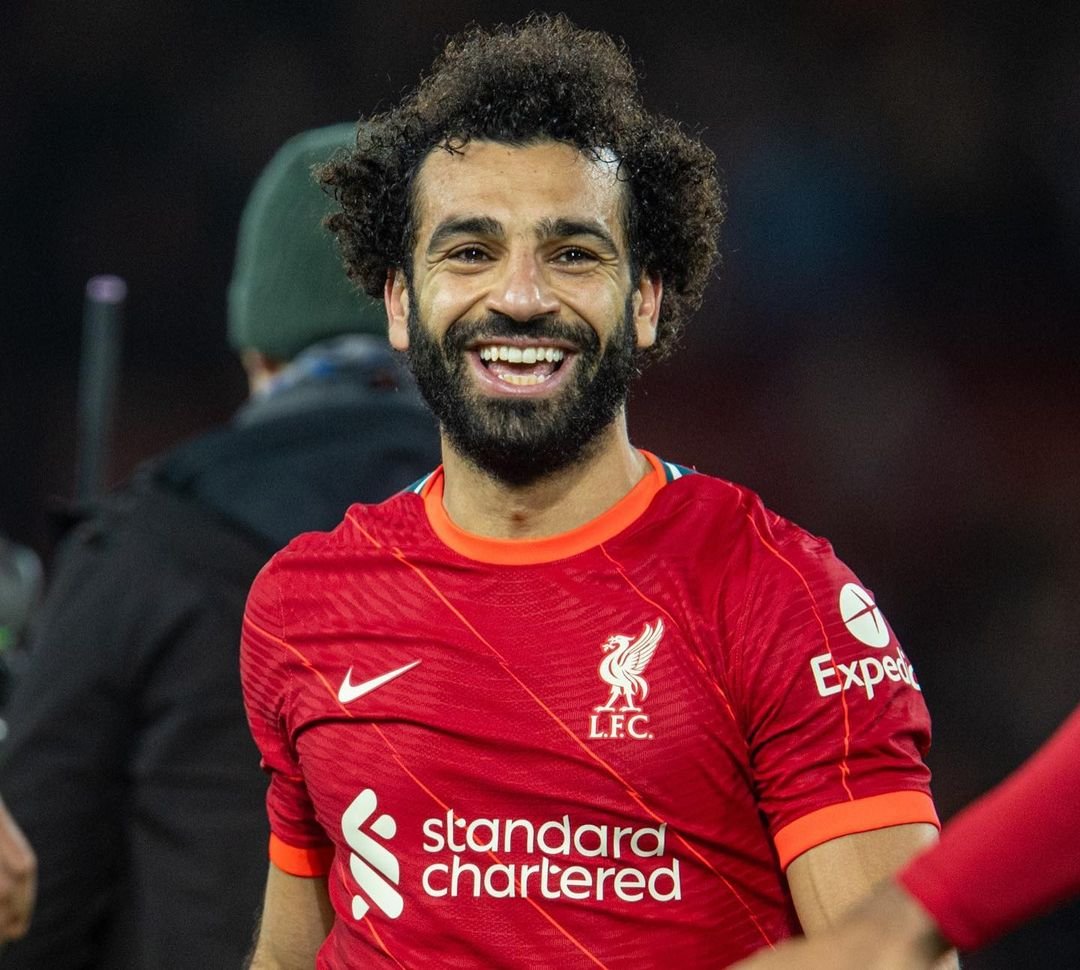 He was named the African greatest of all time and well known for his finishing, dribbling, and speed. Salah began his senior football career in 2010 by playing for Al Mokawloon. He left the club in 2012 to join Basel and won two Swiss Super League titles with them.

He joined Chelsea in 2014 for a reported fee of £11 million but was loaned to Fiorentina and luckily was signed permanently for £15million fees by Roma.

In 2016-2017 season, he became the main figure for the club against Juventus reaching double figures in both goals and assists.

Salah later moved to Liverpool in 2017 for the club record transfer of £36.9 million and earning £400,000 per week. He set his first record for most premier league goals and helped them to reach the 2018 UEFA Champions league Final.

He is still with the club till date and has renewed a long term contract with them as of 2022. Salah has won a lot of accolades and awards like: Two PFA Players’s Player of the Year awards, Three Premier League Golden Boots, the Premier League Playmaker of the season, 2018 FIFA Puskas Award- For his winning strike in the first Merseyside derby in 2018 season. 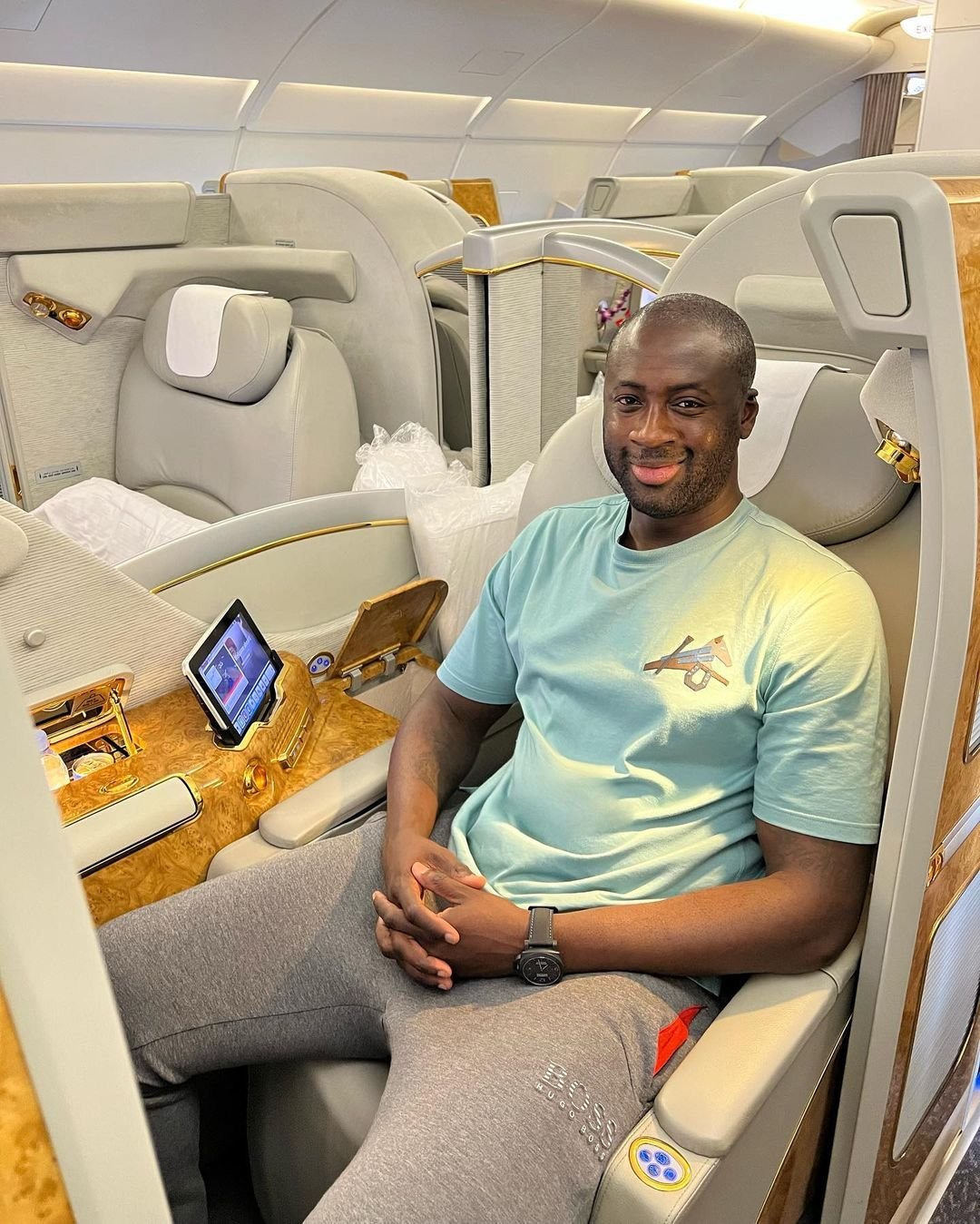 Gnégnéri Yaya Touré (born 13 May, 1983 in Bouake, Ivory Coast) is an Ivorian professional football coach and a former midfielder.

Yaya Touré started his football career at Ivorian club, ASEC Mimosas, where he debuted at the age of 18. His outstanding performances attracted attention from Europe. He first played for Belgian club, Beveren in 2001, Metalurh Donetsk in 2003, Olympiacos.

in 2005, joined the French Ligue 1 Monaco in 2006 after representing his country at the 2006 World Cup. In 2007, he joined Spanish club, Barcelona for £6.7million and played over 100 matches for them. He was part of their historic 2009 Barcelona side that won six trophies in a year.

He left the club in 2010 and joined the premier League Club Manchester City, where he became the key figure by scoring the most notable goals in the 2011 FA Cup semi finals and finals. Yaya helped the club to earned their first League title in 44 years.

Yya Toure left the club in 2018 and returned to Olympiacos but the contract was terminated on December, 2018 by mutual agreement and joined the China Ligue one side Qingdao Huanghai before retiring from professional football.

Yay touré had won the BBC African Footballer of the Year on a public vote for the second time after leading his country to Victory in 2015 African Cup of Nations.

He is the younger brother to the professional footballer Kolo Touré, who was his teammate at Manchester city.

He is the fourth richest African footballer with an estimated net worth of $80million as of 2022. 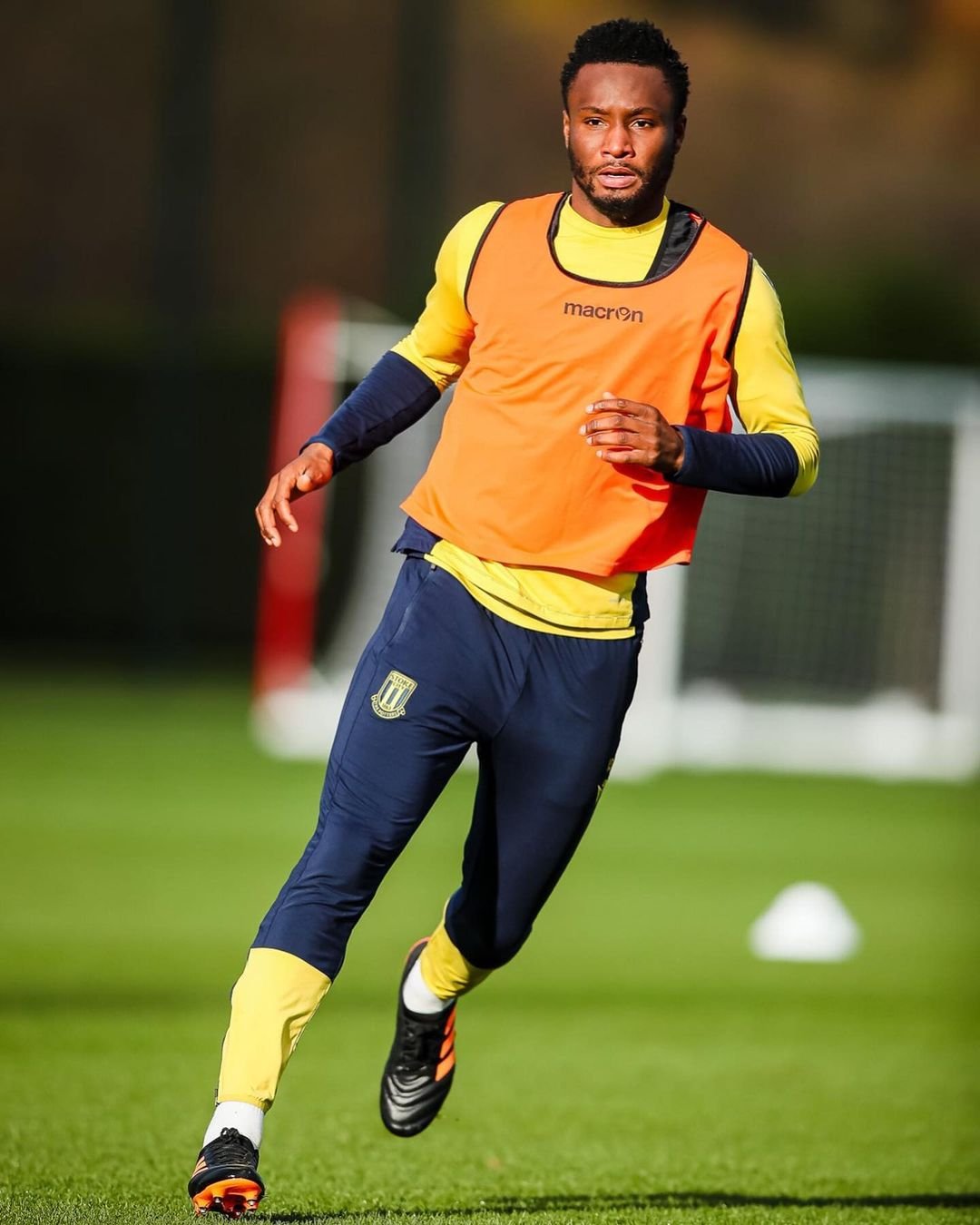 John Michael Nchekwube Obinna (born on 22 April, 1987 in Jos, Plateau State) is a Nigerian Renowned Footballer who plays as a defensive midfielder.

Mikel Obi began his football career at the age of 12, when he played in Pepsi Football Academy. He was picked as one of talented Players over 3000 young footballers to play in the match by the team talent hunt.

At 17, he began his professional footballer with local club Plateau United, before moving to Norwegian club Lyn in 2004. In 2006, he had a controversial transfer from Lyn to Man United and caught in between Chelsea.

It was reported that Man United claimed to have signed him from Lyn but he was been pressured which led him making a headline for being kidnapped.

The issue was later resolved in 2006, after Chelsea had an agreement with Man United and Lyn over his contract with his club, terminating Man United option agreement and was signed permanently with Chelsea club for record fee of £16 million.

He is the fifth highest paid African Footballer with an estimated net worth of $60million as of 2022. 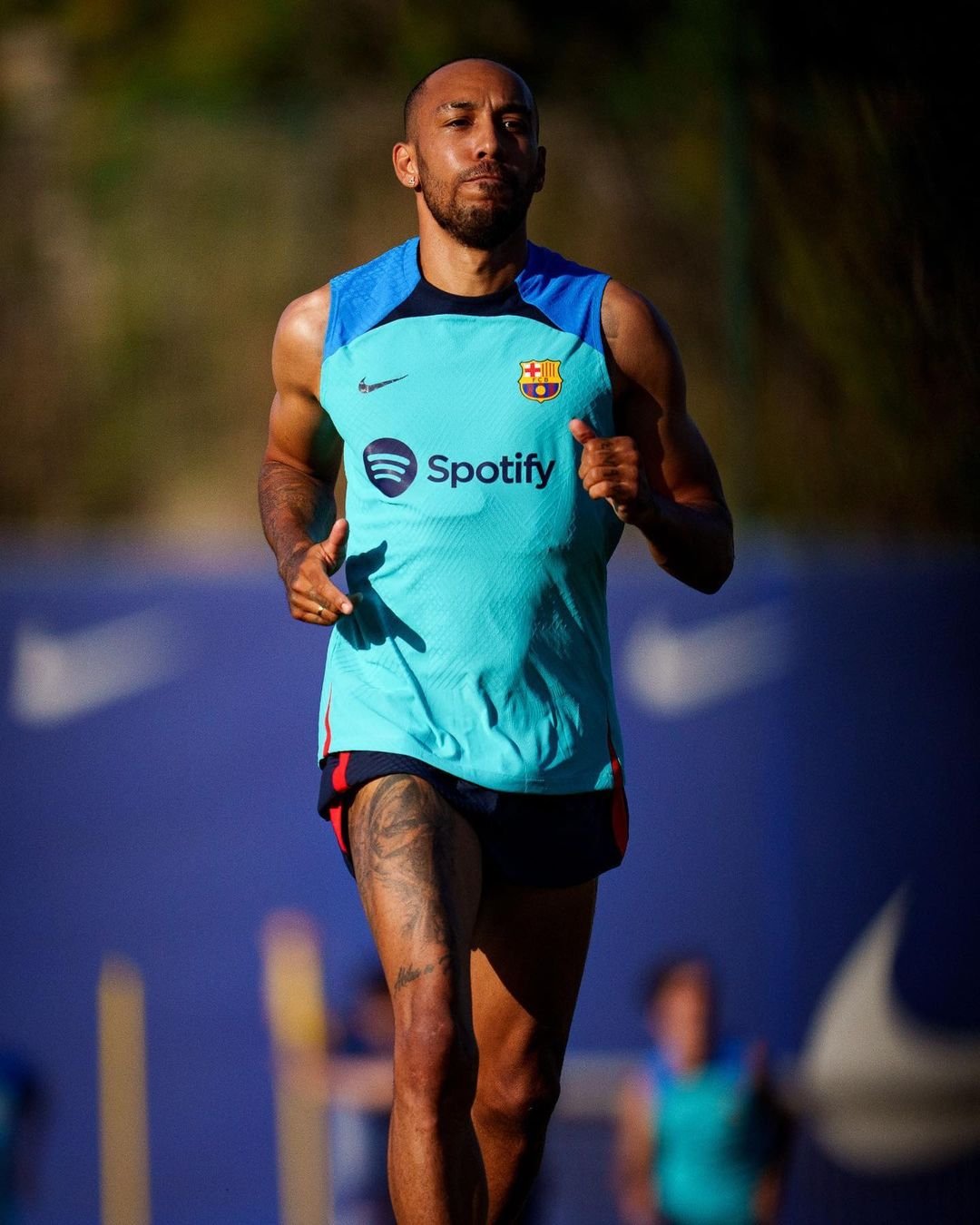 A former Gabonese international player is the country’s all-time top goal scorer. He was named African Footballer of the Year as first Gabonese and second European-born player.

Aubameyang started his senior football career at Italian club AC Milan but never played for the club as he went on a series of loan spells in France.

He joined the Saint- Etienne in 2011 and won a Coupe de la Ligue title before joining Borussia Dortmund in 2013. He became the club’s seventh all-time goalscorer in 2016-2017 season and won DFB Pokal.

In 2018, he signed a contract deal worth of £56 million with Arsenal club, won the FA cup for them and later terminated his contract by mutual agreement before joining Barcelona as of 2022.

He is the sixth richest African Footballer with an estimated net worth of $50 million as of 2022. 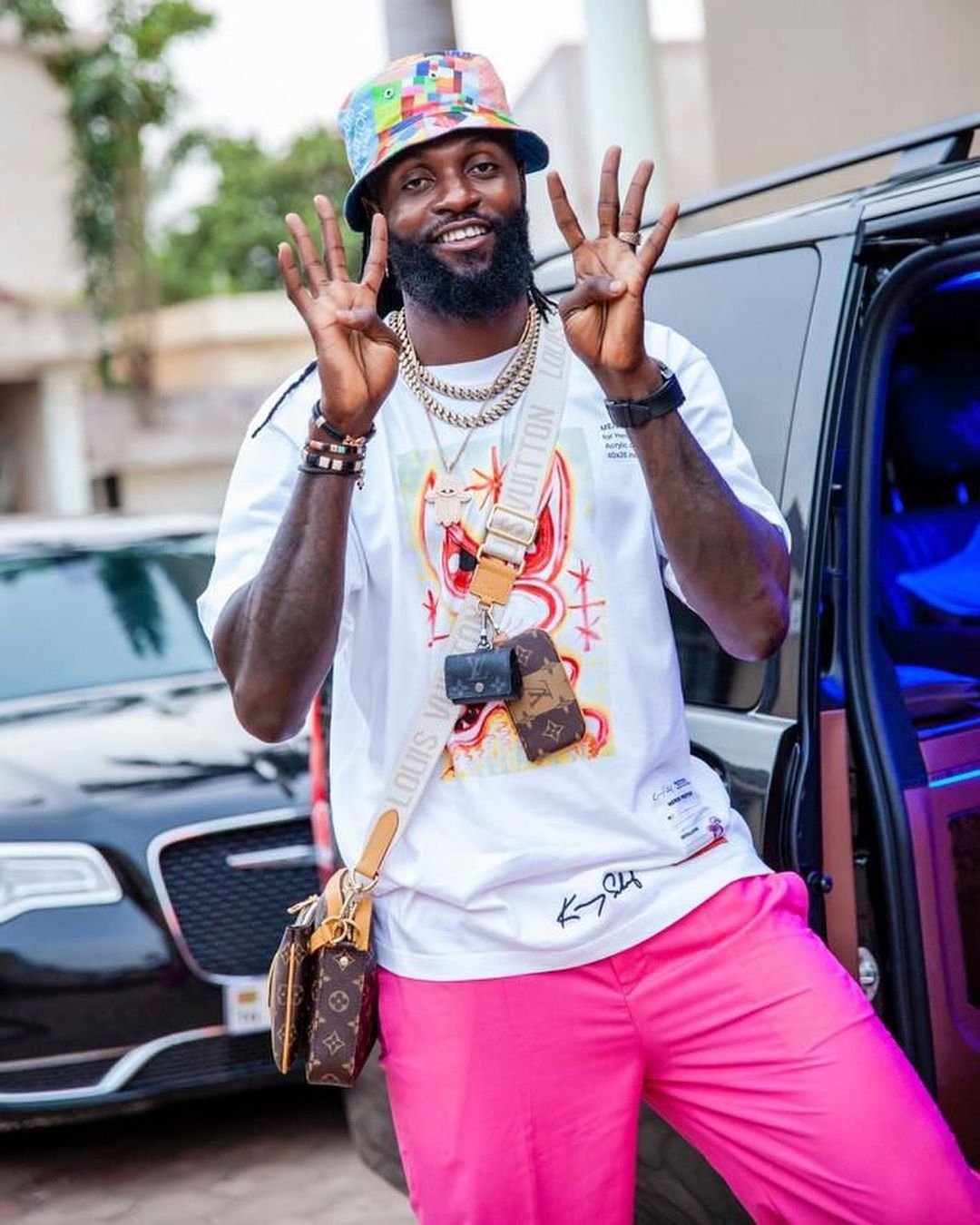 Sheyi Emmanuel Adebayor (born on 26 February, 1984 in Lomé, Togo) is a Togolese professional footballer who plays as forward for Togolese Champion at National club Semassi.

He is currently Togo’s all-time top goal scorer with 32 goals and was voted African Footballer of the Year in 2008.

Emmanuel started his Football career with the Sporting Club de Lomé. He was selected by some football scouts from Metz and moved with them to France in 1999. He played for the club for six years before moving to Arsenal for the club record fee of £3million on 13 January,2006.

He was nicknamed as Baby Kanu, a former Arsenal player, Kanu Nwankwo who was his role model at his younger age.

He also played for Manchester City in 2009 on a five-year contract for a transfer fee of £25million and was loaned to Real Madrid in 2011.

He returned to Manchester City on July the same year and was later signed by Tottenham Hotspur on August 2011.

In 2020 and currently in Semassi-Togo Championnat National club in 2021.He is the seventh richest African Footballer with an estimated net worth of $45 million 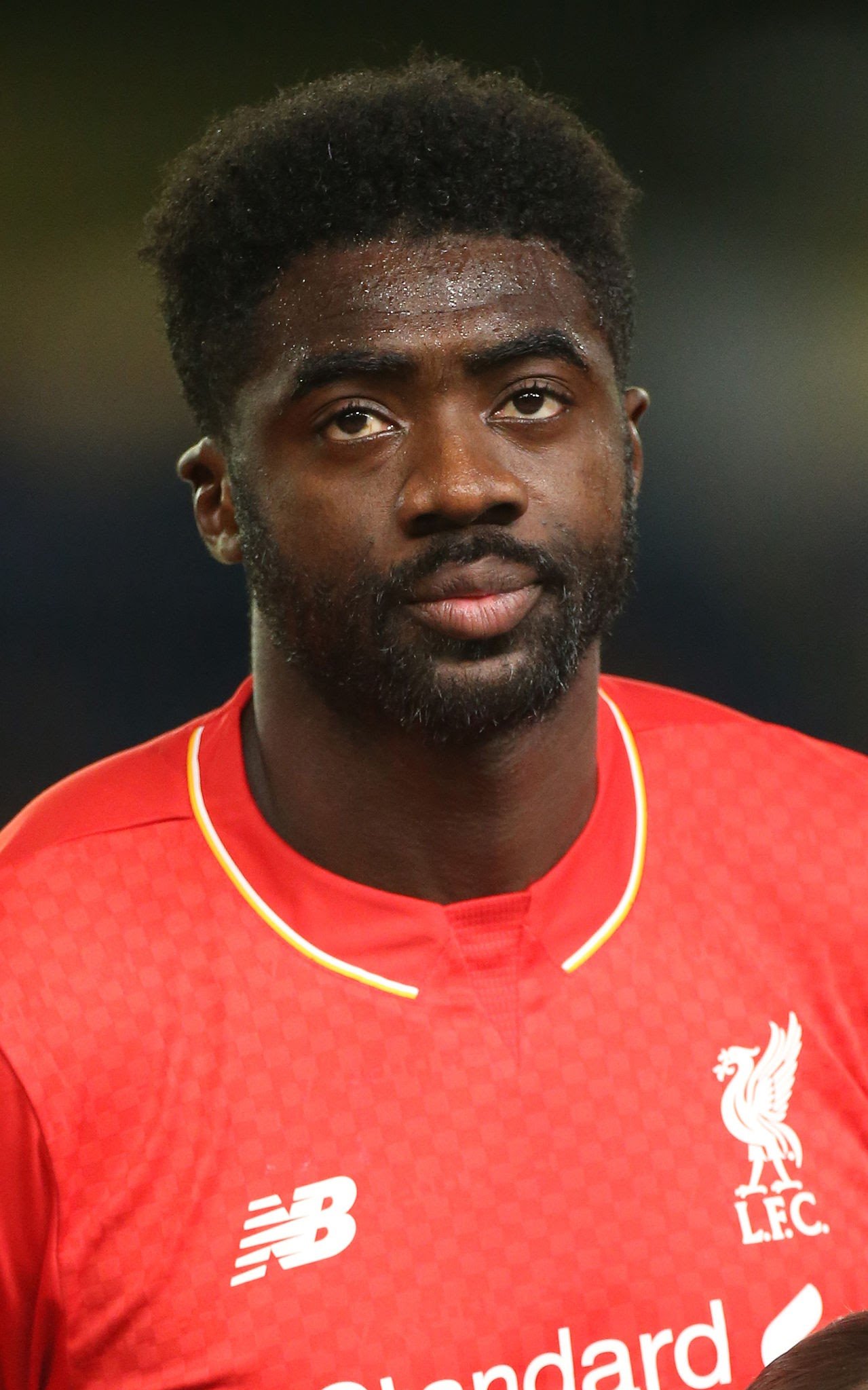 Kolo Abib Touré (born 19 March, 1981 in Bouake, Ivory Coast) is an Ivorian talented football coach and a former player as a defender for international clubs.

He is currently the first team coach at Leicester City and also for Ivory Coast national team.

Kolo Touré began his football career at the ASEC Mimosas before moving to Arsenal in 2002. In 2009, he moved to Manchester City and played along his younger brother Yaya Touré.

He was later transferred to Liverpool in 2013 and joined Celtic club in 2016. After a year, he announced his retirement from football and took a coaching role in Celtic on September, 2017 and currently at Leicester City as their team coach.

He is the seventh richest African Footballer with an estimated net worth of $40 million.
ALSO, READ Top 10 Richest Pastors In The World (Photos) 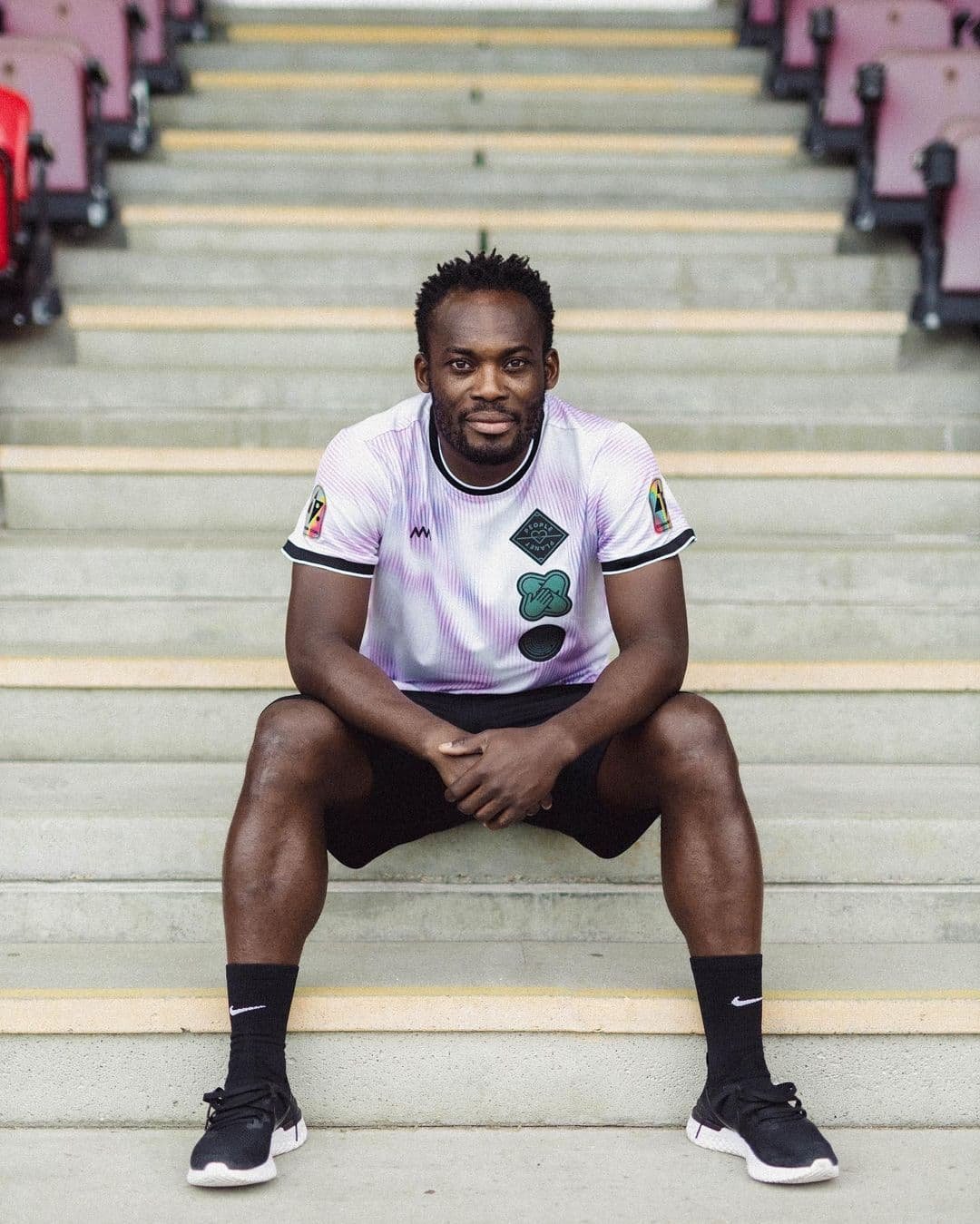 Michael Kojo Essien (born 3 December, 1982 in Accra, Ghana) is a Ghanaian professional footballer, who played as midfielder and currently a football coach at Danish Superliga Club.

Emmanuel Essien started his football career with Liberty Professional in Ghana and moved to play for Bastia in France in 2000.

In 2003, Paris Saint- Germain took interest to sign him but he rejected their offer and joined Lyn for transfer fee of €7.8 million.

He joined Chelsea in 2005, went on a loan to Real Madrid. 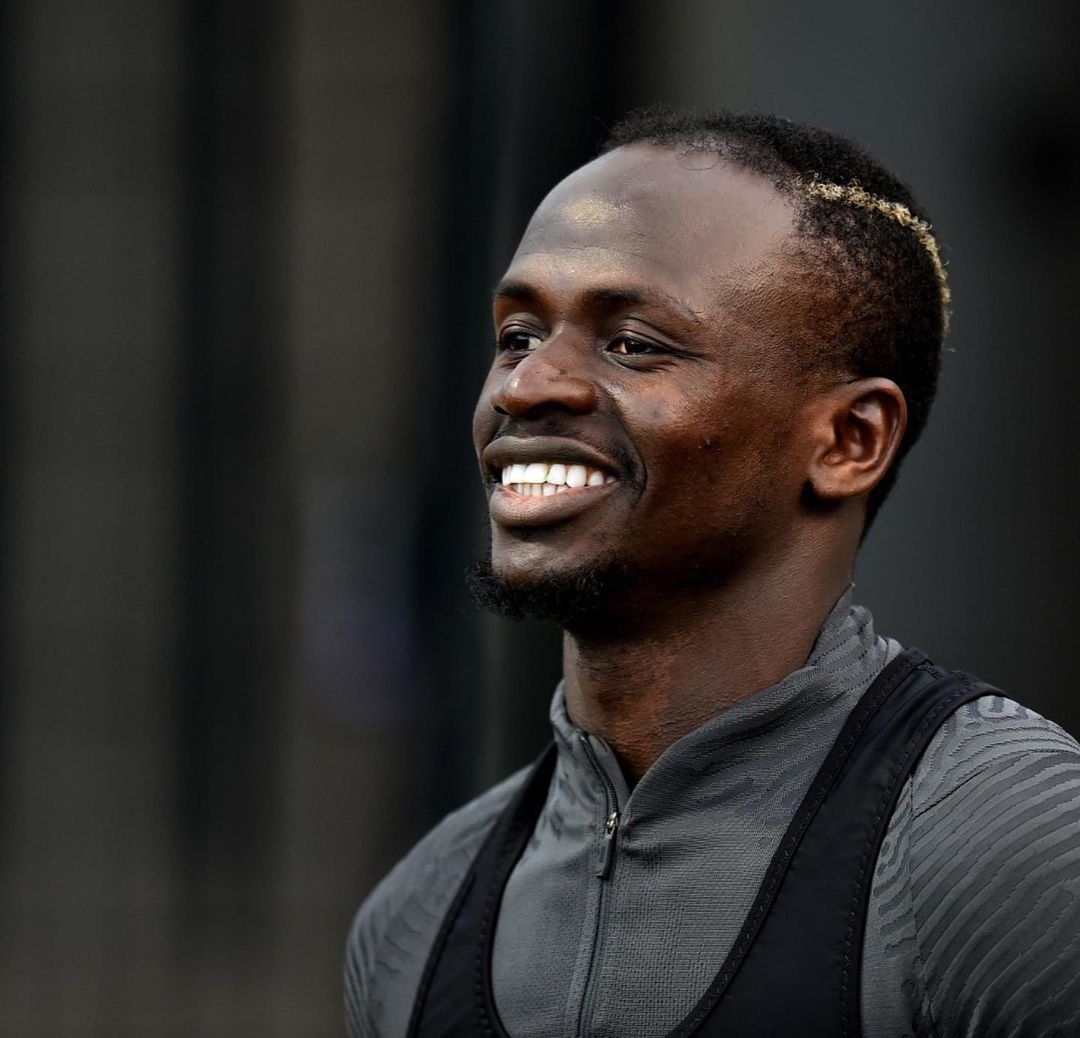 Sadio Mané (born on 10 April, 1992) is a Senegalese talented footballer who plays as Striker for Bayern Munich and Senegal National team.

Mane began his football career with Ligue 2 club, Metz, at the age of 19 but didn’t stay for long and joined Australian club Red Bull Salzburg for a fee of € 4 million in 2012.

He was transferred to Southampton in 2015, joined Liverpool in 2016. He stayed in Liverpool for five year before joining the Bundesliga club Bayern Munich in 2022.He was named African Footballer of the Year in 2020 and ranked fourth for the 2019 Ball d’Or, Fifth in the Best FIFA Men’s Player in 2019. On October 2021, he scored his 100th Premier League goal, becoming the third African to reach the landmark after Didier Drogba and Salah.

He is the Tenth richest African Footballer with an estimated net worth of $30million as of 2022.

Top 10 Poorest Countries In The World
Top 10 Richest Yoruba Actors In Nigeria 2022
To Top
%d bloggers like this: