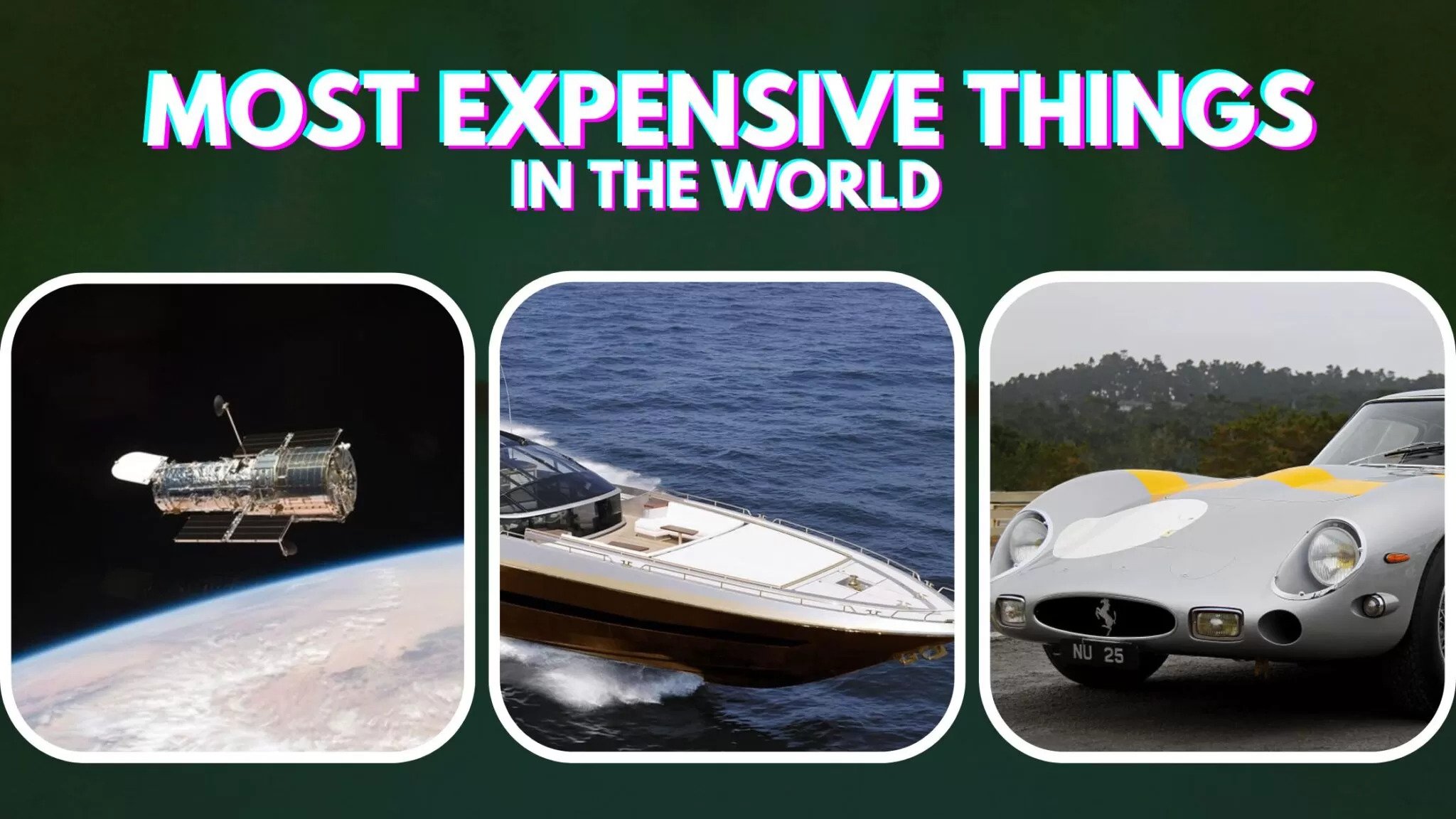 It may seem weird to you that these rich men spend their money on expensive things; but once you have money, you will want to acquire as many items as possible from different parts of the world.

Top 10 Most Expensive Things In The World

The History Supreme is the most expensive yacht in the world but nobody has seen it. It is said to be made with 100,000 kg of gold and platinum, has a feature wall made of T-Rex bone and meteorite, and includes a bottle of booze with an 18.5-carat diamond on it.

Stuart Hughes, the Creator of the Yacht History Supreme says “all features including a deck, dining area, rails, and anchor are made from precious metals. It was said to have been built for a Malaysian businessman but no one knows where it is. It reportedly costs $4.8 billion.

The Hubble space telescope has remained in operation since it was launched into low Earth orbit in 1990. Known for its use in astronomy, it is one of the largest and most versatile space telescopes.

The Hubble telescope is named after astronomer Edwin Hubble and it is the only telescope designed to be maintained in space by astronauts. According to the Guinness Book of World Records, it is the most expensive telescope in the world and its estimated price is $4.8 billion.

Antilia, which is named after the mystical island Antillia, is a private residence in the billionaires’ row of Mumbai, India. This skyscraper mansion is one of the world’s largest and most elaborate private homes.

It is owned by Mukesh Ambani (an Indian billionaire) – it has 27 stories and amenities like three helipads, a ballroom, high-speed elevators, terrace gardens, a spa, a health center, a temple, a 168-car garage, a 50-seat theatre, and a snow room.

It is the third most expensive thing in the world with an estimated price of $2 billion.

The Villa La Leopolda is a large detached Villa in Villefranche-sur-mer, in the Alpes-Maritimes department on the French Riviera. In 1987, Edmond Safra and his wife Lily became the owners of the property. The Villa has 11 bedrooms, a helipad, an outdoor kitchen and gorgeous swimming pools.

It is the fourth most expensive thing in the world with an estimated price of $506 million.

Salvator Mundi (“saviour of the world” in Latin), is a painting attributed in whole or in parts to Leonardo da Vinci. The painting was sold at auction on 15 November 2017 to Prince Badr bin Abdullah Al Said – making it the most expensive painting ever sold at a public auction.

There are at least thirty copies and variations of the painting carried out by Leonardo’s pupils and followers. The original painting by Leonardo himself was thought to have been destroyed or lost around 1603.

It is the fifth most expensive thing in the world with an estimated price of $450 million.

The card players is a series of oil paintings by the French artist Paul Cézanne. There are five paintings in the series. The largest version of the painting is owned and displayed by the Barnes Foundation Museum in Philadelphia, Pennsylvania.

It is the sixth most expensive thing in the world with an estimated price of $250 million.

Garçon à la Pipe (in English: Boy with a pipe) is an oil on canvass painting by Pablo Picasso. It was painted during his Rose period when Picasso was 24 years old.

This painting shows a Parisian adolescent boy holding a pipe in his left hand and wears a wreath of flowers on his head, surrounded by two floral decorations.

It is one of the most expensive in the world, after being sold at Sotheby’s auction for $104 million in 2004.

The Ferrari 250 GTO is a GT car produced by Ferrari from 1962 to 1964 – just 36 of the 250 GTOs were manufactured during this period. “GTO” stands for Gran Turismo Omologato, Italian for “Grand Touring Homologated”.

It was placed on a list of the “Greatest Ferraris of All Time” by Motor Trend Classic.

It is the eighth most expensive thing in the world with an estimated price of $70 million.

L’Incomparable is a necklace created by a Lebanese jeweller Mouawad which features the world’s largest internally flawless diamond. The diamond was found in the African Congo in the 1980s by a young girl in a discarded pile of mining rubble.

It was completed in 2012 and was certified as the priciest necklace in existence by the Guinness Book of World Records. It is the ninth most expensive thing in the world with an estimated price of $55 million.

This dazzling accessory was made in 2000 and it brings a whole new meaning to luxury. The 201-Carat Chopard watch has an array of colored diamonds added to give it its glamorous appeal. There is an inclusion of 874 individual stones in a single piece and at the center of the piece are 3 shaped diamonds that open like flower petals, thanks to a spring-loaded mechanism.

The 201 carat chopard watch is the most expensive watch in the world with an estimated price of $25 million.

One of the things about being super rich is that you can buy the most ridiculous things at unbelievable prices and show them off confidently. Most of these expensive things in the world are things one might not be able to afford in this lifetime. Quoting George Bernard Shaw, “ Money is not important. But a lot of money is something else”.