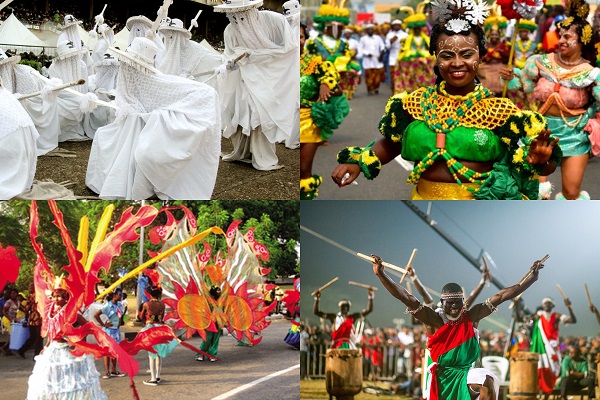 Festivals are ways by which people celebrate culture, glorious heritage and traditions. These cultural festivals play an important role in our social lives and come with cultural performances, showing unique cultural expressions common to various gender and age sets.

Cultural festivals in Nigeria are carried out by different tribes and ethnic groups. These special occasions are in honor of the different gods and deities or to complete certain rites (cultural/religious).

The Eyo Festival, also known as the Adamu Orisha Play, is a Yoruba festival that is unique to the people of Lagos State, Nigeria. The first procession in Lagos was on the 20th of February 1854, to commemorate the life of Oba Akintoye.

“Eyo” also refers to the Masquerades (masquerade dancers) that are seen during the festival. It was held, back in the day, to escort the soul of a departed Lagos King or Chief and to usher in a new King. The white-clad Eyo Masquerades with sticks represent the spirits of the dead, and are known in Yoruba as “agogoro Eyo”.

There are some prohibited items at the festival that might get you a beating from the Masquerades such as smokes, bicycles, sandals, suku (hairstyle among the Yorubas), male with a cap of any kind, female with head tie, okada (motorcycle).

The Calabar Festival, also known as Africa’s Biggest Street Party or the Pride of Nigeria is an annual carnival held in Cross River State, Nigeria. The carnival which is used to mark the Christmas celebration yearly holds every December.

Over the years, it has become Nigeria’s biggest carnival and an internationally recognized one. It was started in 2004 by the then Governor, Donald Duke – as a way of promoting tourism and improving the local economy. The festival activities include Essay writing competitions, music performances, boat regattas, fashion shows, e. t. c.

Osun-Osogbo is a sacred grove along the banks of the Osun river, just outside the city of Osogbo, Osun state of Nigeria.

The Osun-Osogbo festival is celebrated in August at the Grove to traditionally cleanse the city and culturally reunite the people with their ancestors. The festival helps the tourism sector of Nigeria.

The New Yam Festival of the Igbo People ( Iri Ji, Iwa Ji or Ike Ji) is an annual cultural Festival held at the end of the rainy season in early August, by the Igbo People.

The New Yam Festival is a celebration showing the importance of the yam in the socio-cultural life of the Igbo People of Nigeria. All old yams must be eaten or discarded before the celebration day. The festival comes with Igbo cultural activities like Contemporary shows, fashion parades and masquerade dances.

The Argungu Fishing Festival is a yearly four-day festival in the state of Kebbi and some other states in the north Western part of Northern Nigeria. The main purpose of this festival is to fish, unite, entertain and have fun.

The Durbar Festival is an annual festival celebrated in several northern cities in Nigeria such as Bauchi, Bida, Kano, Katsina, Sokoto, Zazzan and Ilorin. It is a four-day show of Opulence, horsemanship and street parades.

The festival shows the end of Ramadan and also happens same time with the Muslim festivities; Eidal-Adha and Eid al-fitri.

The Ofala festival is a yearly ceremony practiced by Igbo People. It is common among the indigenes of Umueri, Onitsha, Umuoji and other neighboring towns such as Nnewi, Aguleri, and Ukpo. This festival is celebrated within two days and serves as a rite of renewal of the king.

Ojude Oba festival is an old festival celebrated by the Yoruba people of Ijebu-Ode, Ogun state. It is one of the most spiritual festivals celebrated in Ogun state and it takes place on the third day after Eid al-Kabir.

Homages are paid to the Royal Majesty, the Awujale of Ijebuland. It is a one-day celebration as sons and daughters of Ijebuland unite through culture, fashion, glamour, candour and beauty.

Sponsors of the festival include Fan Milk, UAC of Nigeria, MultiChoice, and so many more.

Egungun festival is a festival for the reverence of the Yoruba masquerade or ancestors. The annual ceremonies in Yoruba land are in honour of the dead – as a means of assuring their ancestors a place among the living.

Members of the society wear their masks and dance to marketplaces, to represent the dead spirits of their ancestors. The spirit to be venerated is only decided by Ifa Oracle. The Egungun (masquerades) names can be identified as Alapansanpa in Ibadan, Danafojura and Awodagbese in Ogbomoso and Feleru in Ibobu, Osun state.

Sango Festival is held by the Yoruba people to honour Sango, the thunder and fire deity, who was a warrior. The festival takes place in August, at the palace of the Alaafin of Oyo and is also observed in over fifty countries around the world.

It was renamed in 2013 to World Sango Festival by Oyo State Government. The festival attracts over 20,000 spectators from around the world including Trinidad, Tobago, Brazil, Cuba and the Caribbean. The festival starts with Iwure Agba, led by the Sango Priest.

These cultural festivals bring visitors from all over the world and there is no better way to experience the rich, cultural heritage of Nigeria than participating in the celebrations.

These cultural festivals in Nigeria are marked by natural happenings such as the first/last rain of the year, moon appearances, period of harvest, e .t c. There are some festivals to promote arts in Nigeria, in the film and music industry too.

Top 10 Best Private Universities in Nigeria
Top 10 Most Expensive Things In The World
To Top
%d bloggers like this: