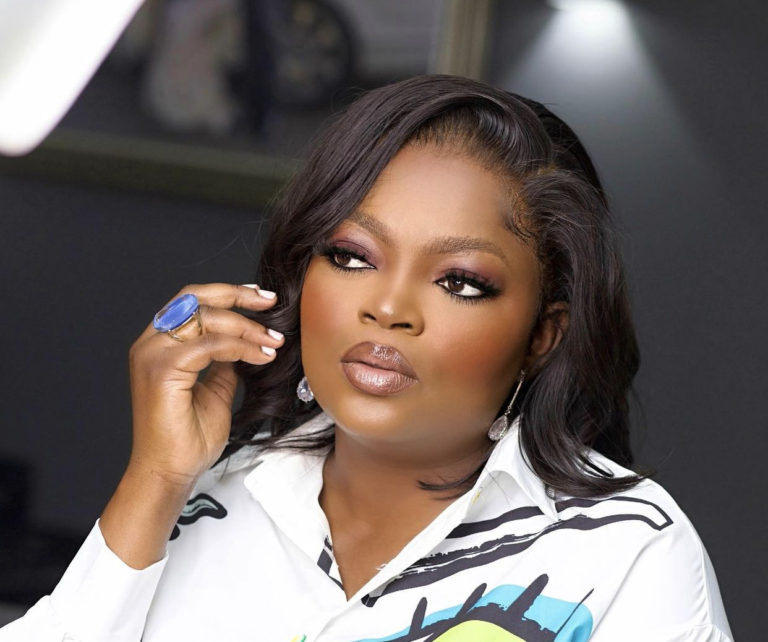 Funke Akindele is a Nigerian talented Actress and one of Nigeria’s richest film producers. She is the CEO of Scene One Film Academy.

Funke Akindele was originally born on 24 August,1977 in Ikorodu, Lagos State. She is the second of three children (Two girls and a boy). Her Father is a retired school principal while her mother is a medical doctor.

She later gained admission into Former Ogun State Polytechnic, Now Known as Moshood Abiola Polytechnic where she  obtained her Ordinary National Diploma (OND) in Mass Communication. She took interest in Law and finally earned a Law degree from the  University of Lagos.

Funke Adinkele came into spotlight after appearing in the popular United Nations Population Fund (UNFPA)-sponsored Sitcom I Need to Know as Bisi, an inquisitive but intelligent secondary school girl in 1998-2002 at the age of 21.

In 2009, she won the African Movie Academy Award for Best Actress for Leading Role.

Her major breakthrough was her role as Jenifa– a comedian village girl that came to town- in her self-produced Yoruba movie titled Jenifa.

She later launched a Tv series, Jairy’s dairy as its sequel where she was the lead character alongside Fisayo Ajisola, Michael Uba as James, Juliana Olayode, Joy Nice as Pelumi, Omotunde  Adebuwale as Adaku, Falz and Her husband JJC Skillz as Marcus

She also launched her movie, titled Omo Ghetto: the saga in 2020 which became the highest-grossing movie with the record of over N636million after Kemi Adetiba’s movie titled “The Wedding Party” which held a record of N456, million for four conservative years.

In 2022, she won the Best  Actress in A Comedy and Best Costume Designer for the movie, and was nominated for other two awards.

Her new web series, Aiyetoro town– a spinoff from her popular Tv  series Jenifa’s Dairy -was launched in 2019. She also appeared in the political drama movie titled, Your excellency as her Directorial debut in 2019.

Funke Akindele has been featured in so many movies like: the final whistle in 2000, Egg of life in 2003, The Narrow path in 2006, Maami in 2011, Moms at war in 2018 and others. She has  gained more fans and admirers from her outstanding performance and hardworking especially the way she speaks in some of her movies especially in Jenifa’s Diary.

In January 2018, there was a speculation that Funke Akindele would debut in the Hollywood movie, Marvel’s Avengers: Infinity War as one of the listed Casts on IMDB as guard to Dora Milaje according to Mainstream Nigeria press.

Few weeks before the show, her name was replaced with a fellow Nigerian popular actress Genevieve Nnaji with Funke’s upload show to have been a hack.

In February 2018, it was reported that Senate president and chair of the National Assembly, Dr. Bukola Saraki has given his words to Marvel Studios to feature Funke Akindele  in the movie.

In July 2016, she had an  Interview, where she stated her reason for acting less in the yoruba Film industry. She said it was because of piracy and was not ready to risk her reputation over that.

She is currently the CEO of Scene One Film Production and SceneOne School of drama, where aspiring and talented young and old people get trained on arts, music and drama.

Funke Akindele is married to Abdul-rasheed Bello, popular known as JJC Skillz. They tied the knots in a private wedding in London in May 2016, and they are blessed with a set of twins (2 boys).

The duo met in 2013 when Funke needed a director for her Tv series Movie, Jenifa’s Diary. Along the line, they fell in love but kept their relationship on a low profile because of their former Marital statuses (both are divorcees). But there was a speculation about them being separated but still shared a lot of things and in custody to their kids. This was made known to the public by her husband, JJc Skillz on his Instagram page.

Although, she was first married to her ex-husband, Kehinde Almaroof Oloyede also known as Kenny Doo-a Nigerian politician and business man- in May 26, 2012 but due to undisclosed differences between the couple, the union lasted for a year and ended in July 2013.

In her interview with Chude Jideonwo, she said: “You know, I just wanted to get married. I want to do things right, have children, and all that. And I went into the (first) marriage, it didn’t work fine. And it ended in a very bad way, in social media, the noise was everywhere.

She said she learned about her marriage crash through a phone call while on a film set. She revealed her it affected her even led to losing a  lot of endorsement deals but she didn’t let them weigh her down.

“I channelled it to work and I was saving at that period. I remember Eniola Badmus, we were always together on set. She won’t make me feel bad as we were cracking jokes and laughing,” she said.

Funke gave birth to her twins in Los Angeles, USA on December 2018. Though, there was a rumor about her first set of twins which she  had through IVF but they didn’t make it alive. She immediately debunked the news and welcome her set of twins in the following year in good health condition both the mother and babies.

Funke Akindele’s Net worth is estimated be  around $7.6million.

Funke Akindele has made her way to the top and has become a brand ambassador to renowned brands. She has signed mouth-watering endorsements with several big brands like:

Kelloggs is a commercial brand that produce cereals for breakfast and so. She has appeared more in their commercial television advertisement and even in their  2021 World’s breakfast day essay competition for pupils from 5-12years old.

This is one of Nigeria leading baby diaper brands which has made it to top 5. She signed an endorsement deal with them in 2020 making her the richest brand ambassador in the country.

Waw Nigeria is brand known for their detergent and bar soaps product. She became their brand ambassador in 2019.

Dettol is a popular brand across the country which are best know for their disinfectant and antibacterial products. She has appeared more on their commercial advertisement and also one of their brand ambassador.

Funke Akindele became the brand ambassador in 2018 with the intention of strengthening the bank’s business through her fan base and popularity.

Funke Akindele has a charity foundation known as Jenifa Foundation. This was established in 2019 and its goal is to provide alms to young people will vocational skills.

In 2020, during the Covid-19 lockdown, Funke threw a birthday party for her husband JJc Skillz which was attended by a lot of people. When she was arrested alongside her husband, she claimed it was an in-house party that was not attended by none apart from his family.

Unfortunately, she was pleaded guilty and sent out to do community service for 14days with the fine of $260. She was also forced to create awareness for the virus through NCDC and Dettol.

You can connect with Funke Akindele on her official social media Handle:

1.Where is Funke Akindele State of Origin?

2. How many Kids do Funke Akindele have with her husband?

The couple are blessed with Twins boys in December 2018.

3. Who is Funke Akindele first Husband?

Her first husband was  Kehinde Oloyede a.k.a Kenny Doo- a business man and Nigerian Politician.

4. Is Funke Akindele a Billionaire?

She is not yet a billionaire but her net worth is estimated to be $7.6milliom

They are Zack Bello and Zion Bello. They are four years old as of 2022.

Funke Akindele has no Daughter.