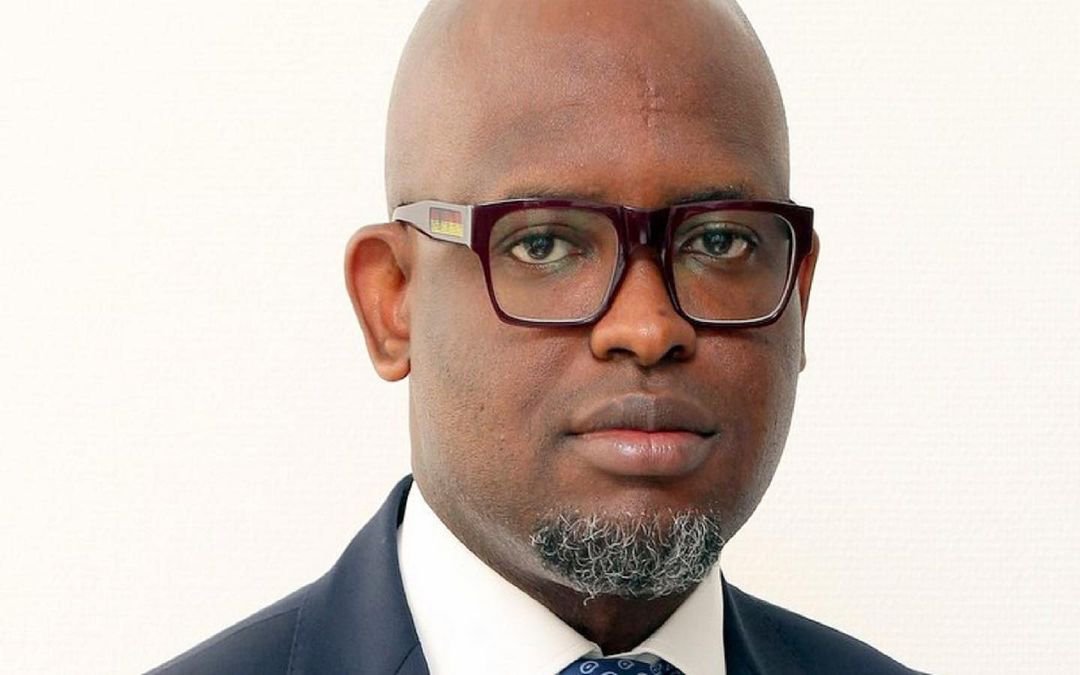 Femi Otedola was born on the 4th of November 1962 in Ibadan, Nigeria, He’s the son of late Sir Michael Otedola. who was once the Executive Governor of Lagos State.

Femi was the second son of his mom, Lady Doja.

Femi Otedola is a Nigerian businessman, philanthropist, and the former chairman of FORTE Oil PLC, a fuel importer.

Otedola has 3 other brothers named Ayokunle, Rotimi, and Muyiwa Otedola. Otedola once had this zeal for priesthood and was also eager so he’ll study at the seminary school to become a future Rev. father, but the plan came to no avail.

Femi Otedola is married to Nana Otedola and they are blessed with four children. His three daughters are doing well in Nigeria’s entertainment world, with Dj Cuppy and Tolani in the music scene, and Temi Otedola doing well in the fashion world as a Blogger. Femi Otedola’s son, Fewa, who is not well-known, has been kept out of the public eye for family reasons.

picture of femi otedola and his family

Femi Otedola attended the University of Lagos staff school before moving on to Obafemi Awolowo University Ile-fe (OAU), Osun State, where he obtained his first degree in 1985.

According to Forbes in 2016, Femi Otedola has an estimated net worth of $1.5 billion. Femi Otedola has acquired some new businesses and shifted his focus over the years, and he is still growing in wealth, though no specific figure has been reported recently.

Otedola has a lot of money and owns a lot of expensive properties. He owns two mansions in Lagos, one in Ikoyi and the other in Banana Island. He also owns a home in Abuja, Nigeria’s capital.

He has residences in New York, London, and Dubai, among other places. He also owns several high-end vehicles.

Femi Otedola, a business magnate with a net worth of $1.8 billion, is also the proud owner of a private yacht and a private jet.

FEMI and his children

Otedola secured funding in 2003 to establish Zenon Petroleum and Gas Ltd, a petroleum products marketing and distribution company, after identifying an opportunity in the fuel retail market.

As Zenon’s owner and chairman, in 2004 he invested N15 billion in downstream infrastructure development, acquiring storage depots in Ibafon and Apapa, as well as four cargo vessels with a total storage capacity of 147,000 metric tonnes. In the same year, he paid N1.4 billion for a fleet of 100 DAF fuel-tanker trucks.

By 2005, Zenon had a huge chunk of the Nigerian diesel market, supplying fuel to the majority of the country’s major manufacturers, including Dangote Group, Cadbury, Nigerian Breweries, Coca-Cola, Unilever, MTN, Nestle, and Guinness.

Later that year, Zenon purchased a 28.7% stake in African Petroleum, one of Africa’s biggest fuel marketers.

Zenon was one of several companies named in a report into an alleged fuel subsidy scam in 2012. Zenon owed the government $1.4 million, according to the report. It was also reported that Farouk Lawan, the Nigerian legislator who collated the report, was filmed collecting $500,000 from Femi Otedola out of a rumored total of $3 million to remove Zenon from the list.

It was later revealed that Otedola had previously reported Lawan’s harassment and bribe demands to the State Security Services, who had choreographed a sting operation. In February 2013, Lawan was charged with corruption.

Otedola was appointed as the chairman and CEO of Africa Petroleum in 2007 after acquiring a governing stake in the company. In December of that year, he procured a further 29.3% stake in the company for N40 billion. When this personal holding was combined with Zenon’s, Otedola’s total stake increased to 55.3%.

In response to public concerns about kerosene availability and pricing, African Petroleum launched an initiative in 2008 to saturate the market and sell fuel at N50 per liter from more than 500 service stations across Nigeria.

With an estimated net worth of $1.2 billion, Otedola became the second Nigerian after Aliko Dangote to appear on the Forbes list of dollar-denominated billionaires in March 2009. Otedola announced plans to upgrade African Petroleum’s liquefied petroleum gas (LPG) storage terminals in Lagos, Kano, and Port Harcourt in October 2009.

Difficult economic conditions caused by the 2008–09 credit crunch and global oil price slump resulted in a loss for African Petroleum.

Forte’s expanded financial position and diversification into power generation resulted in a 1,321% increase in share price in 2013. The company’s pre-tax profit more than doubled year on year in the first half of 2014, reaching 4.19 billion naira ($25.7 million).

The overall revenue increase for the year was 33%. Otedola re-entered the Forbes rich list in November 2014, after dropping off due to a drop in share price in 2009.

Forte Oil sold 17% of its equity to Swiss commodity trader Mercuria Energy Group in September 2015, gaining access to global commodity markets. The deal was thought to be worth $200 million to Otedola. Femi Otedola sold Forte Oil Plc in 2019 and announced plans to shift his company’s focus from oil to power, Geregu Power Plc.

Otedola has made so many donations to the Michael Otedola University Scholarship Scheme, which was established in 1985 to provide access to higher education for underprivileged students in Lagos State, Nigeria.

Zenon contributed N200 million to the scheme’s fund in 2005. More than 1,000 students have benefited from the program since its inception.

In 2005, Otedola made a N300 million personal donation to the National Ecumenical Centre in Abuja, Nigeria’s primary place of Christian worship.

In 2007, he was one of several donors who contributed N200 million to the State Security Trust Fund to reduce crime in Lagos State.

Later that year, he donated N100 million to the Noforija, Epe-based Otedola College of Primary Education.

In 2008, he donated N80 million to the University of Port Harcourt’s Faculty of Agriculture.

Femi Otedola fulfilled his pledge of 25,000 dollars to the Super Eagles in their 2019 AFCON match against Algeria.

In 2012, Femi Otedola was reported by credible media outlets to have paid a bribe of $620,000 to Boniface Emenalo and Farouk Lawan, the Chairman of the House Committee on Fuel Subsidy Regime at the time.

The reason given by witnesses for Femi Otedola’s actions was that he wanted his company’s name removed from the list of firms indicted by Farouq Lawan’s committee for misusing the fuel subsidy regime in 2012.

Farouk Lawan and Boniface Emenalo faced prison time if proven guilty of accepting money from Femi Otedola, as receiving a bribe by a government employee is a serious offense.

On February 2, 2013, Farouk Lawan and Boniface Emenalo were charged in court by the Independent Corrupt Practices and Other Related Commission (ICPC). Their trial was held at the Capital Territory High Court in Abuja to face a seven-count charge of bribery, an offense that violates Section 10 (a) (ii) of the ICPC Act, 2000 and is punishable under Section 10 of the same Act.

Farouk Lawan initially pleaded not guilty, as did Boniface Emenalo; however, events in court took an unexpected turn when Boniface Emenalo eventually admitted he was guilty and, in fact, had received several bribes on behalf of Farouk Lawan.

Notwithstanding, new evidence provided by the prosecution was very concrete, as Femi Otedola was caught red-handed in a video of him giving a bribe and Farouk Lawan accepting it.

Femi Otedola appointments and other investments

Femi Otedola, with an estimated net worth of $1.8 million, would be expected to hold top positions in various organizations as one of Nigeria’s richest men.

Otedola established CentreForce Ltd in 1994, a company that specializes in finance, investments, and trading. Swift Insurance is also run by Otedola.

Otedola is the CEO and President of SeaForce Shipping Company Ltd, which was once Nigeria’s largest ship owner after gaining control of the distribution of diesel products.

One of his ships, a flat-bottomed bunker vessel with a storage capacity of 16,000 metric tonnes, was the first of its kind in Africa.

In January 2006, Otedola was appointed a non-executive director of Transnational Corporation of Nigeria Plc, a multi-sectoral conglomerate founded in 2004 by then, President Olusegun Obasanjo to respond to market opportunities in Nigeria and across Sub-Saharan Africa that required heavy capital investment. He served in this capacity until February of 2011.

Otedola has made several real estate investments, including Zenon’s N2.3 billion purchase of Stallion House in Victoria Island, Lagos, from the Federal Government in February 2007.

He was appointed chairman of the Transcorp Hilton Hotel in Abuja the following month to lead the hotel’s expansion and upgrade to a seven-star facility.

he also owns FO properties Ltd Femi Otedola is said to be a financier for the People’s Democratic Party, having contributed N100 million to President Obasanjo’s re-election campaign in 2003. President Goodluck Jonathan counted him as a close ally. Since 2004, he has been a member of the Nigerian Investment Promotion Council (NIPC) and a committee charged with developing commercial relations with South Africa. President Goodluck Jonathan appointed Femi Otedola to Nigeria’s National Economic Management Team in 2011.

Forte Oil changed its name to Adrova PLC in 2020.

Here is the summary of Femi Otedola’s appointments in the years past: