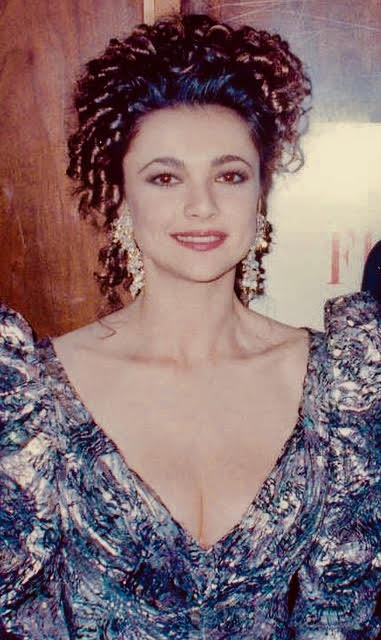 Emma Elizabeth Wylie Samuelson (born on August 28, 1960, in London, United Kingdom) popular known as Emma Samms is an English Actress and TV Host. She came into the limelight after her role as Holly Sutton on the American daytime Soap Opera, General Hospital and as the second actress to play Fallon Carrington Colby on the prime-time soap opera Dynasty.

Emma Samms was born in England, United Kingdom on August 28,1960 to Michael E. W Samuelson, who owned a film equipment rental company, and Madeleine U. Samuelson(née: White), who was also a ballet dancer . Her grandfather, G. B Samuelson, was a pioneer of British Cinema.

Emma Samms was raised as a Judaist in the Jewish region. She was a ballet dancer and trained at the Royal Ballet School but quit at the age of 15 after her hip injury. She took interest in acting and joined a film Academy to become an actress, which led her to change her name to Emma Samms.

Emma Samms rejected two offers made by hugh Hefner to appear in Playboy, rather she appeared on the cover of the February 1988 issue of inside Sports in a bikini and also in swimsuit shots inside the magazine.

In 1983, she co-founded the Starlight Children’s Foundation– an organization that helps seriously ill children and their families to go through their tough times through entertainment, education and families activities-with her cousin, film producer Peter Samuelson.

This organization was built in honor of her deceased brother and cousin, Jamie who died at the age of Nine from aplastic anemia– A condition marked by the incomplete development, or entire absence, of an organ or tissue.

In 1984, she was in a relationship with Tristan Rogers which was made public but the union ended after Samms left General Hospital. She dated Marvin Hamlisch (1980-1981) but ended within a year.

Her relationship life wasn’t an easy on at all but she gave what she could. She was first married to Bansi   Nagji on February 23, 1991, unfortunately, the marriage ended within a year.

She got married to Tim Dillion (A lawyer) in 1994 but ended in the year, 1995. She met her third husband, John Holloway (A Psychiatrist) in 1996 and they tied the knot the same year. The union produced two offspring– a boy(Cameron Holloway) and a girl( Beatrice Holloway) before they split in 2003.

She is currently married to her fourth husband, Simon McCoy– a TV presenter and the CEO of @SimonMcCoyTv on October 9, 2021 at the age of 61.

In April 2018, she suffered an illness known as  Bell’s Palsy-a disease that causes temporary facial paralysis. On May the same year, she made a post on her Twitter page which said: “ Paralysis on my face is 90% better”.

On March 2020, she was tested positive for COVID–19 during the world break- out pandemic. This led her into having health complications with her initial illness since then.

Emma Samms first appeared as Holly Sutton on the ABC day time soap opera ‘General Hospital’ from 1982 to 1985. When she decided to leave the movie series and join the ABC’s Dynasty, her role as Holly Sutton ended with the part of her involving in a plane crash.

On 10 April 1985, she appeared in the fifth-season episode “Kidnapped” as Fallon Carrington Colby, a role originated by Pamela Sue Martin in 1981. Her role was immediately transferred into the new Dynasty, the sequel to The Colby’s for two seasons (1985-1987) but was later cancelled.

She returned to Dynasty in the 23 September 1987 eighth–season premiere, The Siege-Part 1. She stayed in the movie till its last episode on 11 may 1989. In 1991, she also appeared in Miniseries Dynasty: The Reunion.

After the show, she also featured as a guest actress in the sitcom, My two Dads, playing the role of Marcy Bradford, the deceased mother of Nicole Bradford (Staci Keanan) and the woman whom the two fathers- Paul Reiser and Greg Evigan- where crazily in love.

Since then, she has appeared in so many soap operas and movies. She also came back in the movie, General Hospital, where she was brought back from the hospital bed on January,1992 after not being in the show for seven years.

She acted the role of Holly’s look alike half-sister Paloma Perez, a heroic revolutionary and stayed till the end of the Opera show in 1993. In 1995, she appeared as the villainous Grayson louder in the prime time soap opera Models Inc. a sequel to Melrose place, both produced by Former Dynasty Producer Aaron Spelling. She also featured in the TV movie Treacherous Beauties.

Emma Samms appeared in the BBC series Holby City in 2003 and also on the BBC daytime series, Doctors in 2005. She also reappeared in General Hospital its seven-episode in February 2006. She served as a presenter in Daytime Emmy Awards alongside General Hospital co-star Tristan Rogers on 28 April 2006.

She was also featured in the BBC Children in Need reality series, known as Celebrity Scissors hand as a hairdresser on November 2006. She also made a guest appearance on The Bill as drug addict Ella Winstanley.

Emma Samms also performed at the Sadler’s Well Theatre in Shall we dance– a dance revue of musicals by Richard Rodgers, orchestrated by Adam Cooper alongside his wife Sarah Wildor.

In June 2014, she was one of the contestants in BBC gymnastics show Tumble and the second celebrity to be evicted. She also appeared on the new Christmas song, called Rock With Rudolph written and produced by Grahame and Jacky Corbyn alongside 26 other celebrities.

The song was released through an independent record label Saga Entertainment on 30 November and aired with the Sun on 29 November 2018. She kept featuring in the movie series, General Hospital from May 2009 till September 2020.

A Connecticut Yankee in King Arthur’s Court,NBC, as Queen Guenivere in 1989

Emma’s net worth is estimated to be $10million approx.

Emma Samms is fully active on her social media pages on:

Emma Samms left General Hospital due to her health complications. According Sheknows, she wanted to be clear on one important thing and stated: “I just didn’t want people to think I’d recovered and for some reason was avoiding returning to General Hospital to spite them.”

Over talk of her sickness, Samms admitted, “It’s been really frustrating.” Being someone who has a high pain threshold, she explained, “Having been on General Hospital you don’t get days off for being sick. It was all very good training for me. I’m hugely frustrated

2.Who did Emma Samms played on General Hospital?

3.What is Emma Samms doing these days?

She has been reading books, taking the kids out, spending time with her husband at the TV station and Watching the news on Ukraine and Russia wars.

4.Who is Emma Samms husband?

Her character in Dynasty is Fallon Carrington Colby